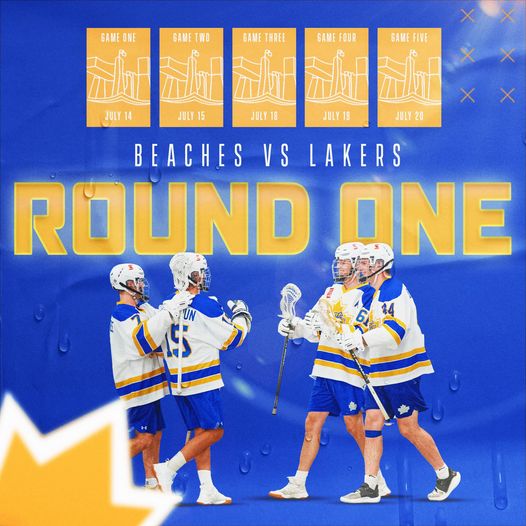 Toronto Beaches Junior A Lacrosse begin the first round of the Ontario Junior Lacrosse League playoffs against the Peterborough Lakers with home game July 14 and 15 at Ted Reeve Arena.

The Toronto Beaches Junior A Lacrosse team begins its first round of the Ontario Junior Lacrosse League (OJLL) playoffs tonight at Ted Reeve Arena against the Peterborough Lakers.

The first two games of the best-of-five series will be played on Thursday, July 14, and Friday, July 15, at Ted Reeve Arena, 175 Main St.

Start time for both of this week’s games is 8 p.m.

Toronto Beaches is hoping to “fill The Sand Box” with fans for their first two home games of the series. The Sand Box is the nickname the team has given to Ted Reeve Arena when it plays home games.

“Beaches Family, we need YOU down at Ted Reeve Arena the next two nights as we open the playoffs against Peterborough,” said the team on its Facebook page.

Youngsters who play minor lacrosse with the Beaches Lacrosse club will receive free admission to tonight’s and Friday’s game.

The ultimate prize in the 11-team OJLL playoffs is to win all four rounds, be declared champion and Iroquois Trophy winner. The OJLL playoff champ earns a trip to the Minto Cup, awarded to the top Junior A lacrosse team in Canada.

Eight teams are taking part in the first round of the OJLL’s playoffs. Other series matchups see the Mountaineers against the Burlington Chiefs; the Whitby Warriors versus the St. Catharines Athletics ; and the Oakville Buzz taking on the Orangeville Northmen.

Games three and four in the Toronto Beaches and Peterborough Lakers series are scheduled for Monday, July 18, and Tuesday, July 19, in Peterborough. If a fifth game in the series is necessary, it will take place on Wednesday, July 20 at Ted Reeve Arena.

The Minto Cup championships, which are returning after a two-year absence due to the COVID-19 pandemic, will be hosted by the OJLL in Brampton from Aug. 22 to 29. The defending Minto Cup champs (from the 2019 season) are the Orangeville Northmen of the OJLL.

For more information on Toronto Beaches Junior A Lacrosse, please go to the team’s Facebook page at https://www.facebook.com/BeachesJrA/