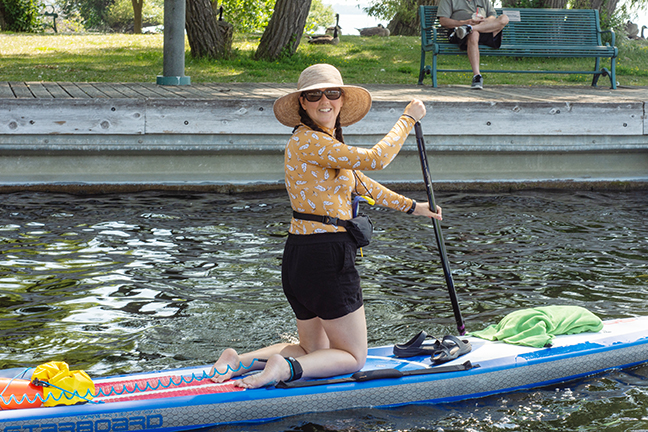 When an environmental group’s shoreline cleanup was cancelled due to the COVID-19 pandemic last year, the founder came up with an ambitious alternative plan. Less than a year later, her staff have produced a documentary film about the pandemic-inspired adventure.

Rochelle Byrne, the founder of A Greener Future, recently spoke with Beach Metro News about her 430-kilometre paddleboarding trip across Lake Ontario to raise awareness about plastic pollution, and the unplanned film that came out it.

“It [the documentary] was just kind of something that came together when we realized that we had a lot of footage and we also had a lot of time because of the lockdown,” Byrne said of the movie that’s now been submitted to film festivals for consideration.

Titled Shoreline, the film follows Byrne through last July’s 18-day journey. She started in Kingston paddling west, included a stop at Woodbine Beach, and ended in Niagara-on-the-Lake, with her staff following on shore, picking up litter and filming her progress.

In a normal year, A Greener Future’s Love Your Lake program has hundreds of volunteers, picking up litter at locations around Lake Ontario. But last year’s events were cancelled for safety reasons.

That’s when Byrne decided to paddleboard across the lake – a socially distanced way to raise awareness around an issue that she said does not receive enough attention.

“There’s a lot of waste ending up in the lake and people having no idea that it’s even happening is such a huge problem,” Byrne said, “Because if you don’t know about the problem, how are you going to fix it?”

The causes of the pollution are complex and for any meaningful change to occur, Byrne said, the public needs to demand action from municipal governments.

Byrne hopes that Shoreline will help give people a better sense of what needs to be done to protect the lake.

While she said governments need to step in to preserve the lake, Byrne emphasized that individuals making small changes, such as reducing plastic waste and conserving water, is important too.

“Not everybody has to be an environmentalist, not everyone has to be taking action 24 hours a day,” Byrne said.

Despite her devotion to raising awareness about Lake Ontario, Byrne said she learned something new every day while out paddling and has gained a greater appreciation for the varied landscapes and wildlife that surround the lake.

“I actually got really close to a loon, so close that it dove under my board. And I had never seen a loon up that close and they’re actually really big,” Byrne said.

Byrne was particularly surprised when she came across a hidden waterfall in Whitby, which is only accessible by water.

Shoreline will be aired online on April 1 from 7 to 8 p.m. followed by a Q&A with Byrne. Tickets are now on sale for the online screening. They can be purchased at https://www.agreenerfuture.ca/shoreline#shoreline-tickets with suggested donation amounts listed. The non-profit has a goal of raising $10,000 for the Love Your Lake program.