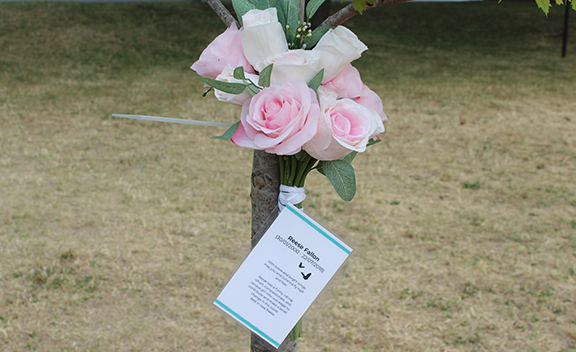 Flowers and a tribute remembering Reese Fallon were placed on her memorial tree in Withrow Park in July of 2020 to mark the second anniversary of the Danforth Shooting.

A class-action lawsuit filed by a number of the victims of the Danforth Shooting against gun manufacturer Smith & Wesson has taken a major step forward after an Ontario Superior Court of Justice judge ruled it can continue to the next phase of certification.

Justice Paul Perell made the decision public on Friday, Feb. 12.

The lawsuit is being brought forward by Samantha Price and Skye McLeod and their parents Ken Price and Claire Smith, and Patrick and Jane McLeod.

Samantha and Skye were both wounded in the Danforth Shooting of July 22, 2018. The shooting took the lives of Beach resident and Malvern Collegiate grad Reese Fallon, 18, and Julianna Kozis, 10, of Markham.

Eleven other people were wounded in the shooting which took place in the Danforth and Logan avenues area after a man with a handgun started firing at people.

Both Samantha and Skye were friends of Fallon and among a group of teenage girls in the Alexander the Great Parkette area celebrating a birthday at the time of the Danforth Shooting.

The lawsuit was first filed on Dec. 16, 2019 by Gowling LLP on behalf of the plaintiffs in Ontario Superior Court of Justice. It is seeking $50 million in general damages and $100 million in punitive damages against Smith & Wesson, which manufactures guns in the United States.

The lawsuit alleges Smith & Wesson did not put existing safety technology into the make of gun (a Military and Police 40 semi-automatic handgun) that was used in the Danforth Shooting. According to the lawsuit, smart gun technology would have prevented the gun being used by anyone other than the legal owner.

Justice Perell ruled that on the point of “negligent design, manufacturer, and or/distribution” the lawsuit’s claim “requires a trial on the merits.”

This is only a first stage in the attempt to certify the class-action lawsuit, but the ruling gives the plaintiffs cause to move forward and seek approval of other aspects of the certification.

None of the allegations in the lawsuit have been proven in court.

In a statement sent to Beach Metro News on behalf of the plaintiffs, Ken Price said they were pleased with Justice Perell’s ruling.

“Nothing will bring back our girls, nor erase the injury and memories of that horrible night,” he said.

“As representative plaintiffs, we are pleased to see our courts agree that Smith & Wesson should be made to answer for the absence of safety features, which the company itself, had been developing, to control unauthorized use of a widely marketed and lethal product. Our goal is to see Smith & Wesson held accountable for the tragedy that affected our families and to help avoid similar tragedies for other families in the future.”

In an interview with Beach Metro News when the lawsuit was filed, Price said the point of it was not about money but to make the issue of smart gun safety technology a priority.

“This is not a revenge play. It is a way to make a difference…We’re coming at this from the device side. Where are the guns coming from and can they be safer,” he said in December of 2019.

Smart gun technology is more than 20 years old, but has yet to be used on guns sold in the United States or Canada, the lawsuit alleges.

According to the lawsuit, Smith & Wesson had entered into an agreement with the U.S. government in 2000 to incorporate smart gun technology in the design of new weapons by March of 2003. That was not the case with M&P40, however, which was made in 2005.

Price is hoping that law-abiding owners of legally registered guns in Canada will agree with calls to make the weapons safer and that the federal government will mandate the use of smart gun technology.

The fact that this lawsuit has been filed in Canada could make a difference as to whether or not it succeeds. Gun manufacturers in the U.S. are protected from civil lawsuits regarding unlawful use of their weapons. That is not the case in Canada.

Lawyers for Smith & Wesson, seeking to have the lawsuit dismissed, argued before Justice Perell that “there are no material facts pleaded to identify any particular ‘smart gun’ design that ought to have been adopted by Smith & Wesson; and…there are no material facts pleaded to establish that a gun intended for military and police use could have been designed in a safer way without significantly increasing costs and impairing the military and police use.”

This lawsuit is believed to be the first time a U.S. gun manufacturer has been named in a suit filed in Canada.

To read Beach Metro News’ story from December of 2019 on the lawsuit being filed, please go to https://beachmetro.com/2019/12/17/victims-of-danforth-shooting-file-150-million-class-action-lawsuit-against-u-s-gun-manufacturer-smith-wesson/