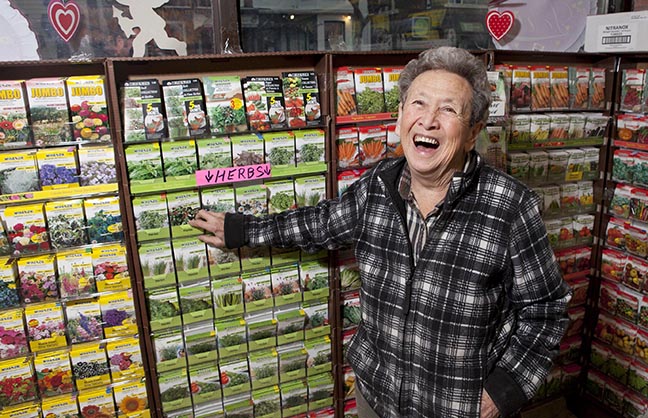 The East Toronto community is mourning the loss of legendary business owner and resident Theresa Tate.

Tate was well known for decades as the owner of matriarch of the East End Garden Centre on Queen Street East near Greenwood Avenue. The business is still run by her daughters Judy, Kathy and Nancy.

“Theresa Tate – known as Mother Tate, T. Tate; no matter what name you knew her as, you knew her as a remarkable woman,” said the family in a eulogy shared with Beach Metro News.

“She came from nothing, raised six kids, started and ran several successful businesses – Tate Movers, Tate Variety, Tate Automotive and most recently East End Garden Centre, all of which provided employment for many family members and support for the community.”

The family said she was still active at the garden centre even in her 88th year, and was up every day at dawn to open the store.

“She knew all her customers and had a friendly word for everyone. Her soft spot for all animals was known to many, and only matched her charitable efforts giving back to the community,” the family said.

Tate was born in Manitoulin Island on March 21, 1932. According to a 2017 story on the Leslieville Lives website by Diane Walton, Tate was born in a teepee. Her father was First Nations and her mother was white.

“Theresa’s early life was no picnic. At the tender age of three, she was put into an orphanage by her mother, who was unable to care for her,” Walton wrote. “At 10, her uncle rescued her and brought here to live with him and was raised with his three boys in Sudbury. She lived and worked with them until the age of 18, when she headed to Toronto; with a Grade 3 education and willingness to work.”

That ethic of hard work stayed with Tate her entire life.

She worked numerous jobs, met her husband Norman and together they raised a family of five girls and one boy. Her children are Linda, Judy, John, Kathy, Nancy and Debbie.

While raising the family, Theresa and Norman ran a variety store on Parliament Street and then on River Street. At that time she sponsored and coached in a hockey league for underprivileged kids in the area.

“It was a mutual respect thing. Helping the community is what it’s all about,” Tate told Watson.

Tate also later worked with the City of Toronto helping women who were victims of abuse to find new places to live.

The family moved their stakes east of the Don River in the early 1980s, buying the first of their Queen Street East properties and setting up the moving business. The East End Garden Centre opened in 1992.

A 2011 Beach Metro News story by Kent Wilson chronicled a visit to the centre and some of its history:

“Everything started back in 1981 when Mrs. Tate and her husband Norman (Tom) cobbled together a collection of disparate trucking, hardware, antique sales, and landscaping interests into a family project that eventually blossomed into East End Garden Centre.

“The business outgrew its original digs, the current structure constructed and finished in May 1992 on the same site, sadly only weeks before Norman succumbed to stomach cancer. Pictures still hang inside the store of a proud man standing alongside his family, a dream realized.

“Today, three generations are involved in the business which employs upwards of 20 staff during peak seasons.

“Back inside, and as if on cue, Mrs. Tate entered the store from the front door with a great deal of clatter – customer in tow – possessing a glance that seemed capable of quickly separating fools from sages.

“The matriarch of the clan is a diminutive, beguilingly self-taught entrepreneur who has grown and adapted with a neighbourhood she has resided in for generations. She’s still on the premises every day, doing light jobs, talking with customers, and mingling with her three daughters.”

Tate told Wilson that “We learn as we go: growing, adding, and understanding the needs of the area. We’re lucky that our customers know that we care. Each year we run into something new, then go out and learn how to do it.”

With the garden centre now full of a wide variety of items for Christmas, the family remembered how much their mother loved this time of year.

“This coming winter reminds us of her love for the holidays, how she spent every December singing Christmas carols happily at the top of her lungs,” they said in the eulogy. “We have lost an important member of the community.”

Those wishing to comment on the tribute page to Theresa Tate can do so by visiting https://www.dignitymemorial.com/en-ca/obituaries/toronto-on/theresa-tate-9904210