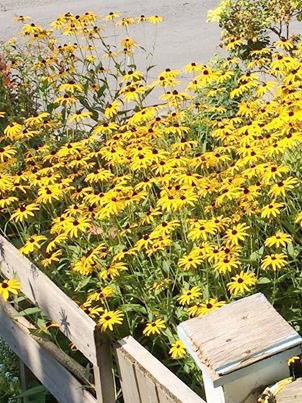 Sometimes gardeners seem to speak a foreign language. “Deadhead the salvia. Be sure to cut it back to a leaf node,” someone tells you. Wait – what?

Usually nobody’s trying to use fancy words, but like other special activities, gardening has terms that pack a lot of meaning into one or two words.

If you’re still finding your way through this green new world, here’s a list of useful gardening words that you’ll often run into.

Annual – A plant that only lives one season. You plant it in the spring or summer; it doesn’t survive the winter. Think petunias and impatiens. Most vegetables are annuals, too. They grow, produce and die. Think tomatoes.

Perennial – A plant that survives winter and returns from year to year. Black-eyed susans/Rudbeckias and hostas are good examples.

Biennial – The weirdos of the ornamental garden. They live only two years, growing only leaves in the first and blooming in the second. They often fool you by scattering seeds after they flower, which makes the cycle begin again.

Shrub – A woody plant up to about two meters tall that doesn’t die back to the ground in winter. Forsythia is one that everybody knows.

Native plant – That one’s tricky. In broad terms, it’s a plant that started out in North America. Some people limit the term to plants that are local to one area.

Pollinator plant – A flowering plant that produces pollen that insects like bees and butterflies feed on. Milkweed is a classic example.

Deadhead – Cutting off faded flowers before they go to seed. Do this to keep some plants, like goldenrod and yarrow, from spreading where they’re not wanted. It also encourages plants to continue flowering.

Mulch – Spreading a natural material of some sort over the bare surface of the soil. Also the word for the stuff you spread. Chopped/shredded leaves are my favourite. They don’t cost anything, they’re easy to get and they look nice in a garden. People also use compost, dried grass clippings and wood chips. Mulch keeps the soil from drying out and helps keep weeds from growing.

Compost – Converting yard and kitchen waste into black, crumbly stuff by letting it decompose. It’s also the word used for the finished product. Spreading compost on the soil improves its texture and adds some nutrients. There are fancy formulas about how much fresh stuff (“green”) and dead stuff (“black”) to add, but you don’t have to follow them. You can make your own, buy it commercially in big bags or have giant amounts delivered.

Amend the soil –Adding natural nutrients like compost or well-rotted manure to the soil in your garden. Soil amendments used to be added to planting holes, but that’s not recommended anymore. Just spread them on the surface.

Hardy –Describes how much cold a plant can withstand. A plant is hardy to -6 Celsius, for example. You don’t have to figure this out for yourself: “Hardiness zones” run in horizontal layers from south to north. Your zone tells you what plants will survive the winter in your area. Toronto is in Canadian zone 6, U.S. zone 5. Anything in zones 1-6 should be hardy here.

Vigorous – Describes how easily a plant grows and spreads (not to be confused with “hardy”). Spireas, like the common bridalwreath, are vigorous shrubs – hardly anything bothers them. Some plants, like mint, are so vigorous that they’re called “invasive” (AKA thugs).

Self-seeding – Means a plant that flowers and sets seed, which will grow into new plants next season. Annuals, perennials and biennials can all self-seed. Alyssum is a good example of a self-seeding annual.

Bract – Brightly coloured leaves that look like petals and surround the plant’s real flower. Common examples of plants having bracts are poinsettias and dogwoods. The real flower is the bumpy thing in the middle. The colourful “petals” are bracts. They protect the flower and attract the attention of pollinators.

Node –The bumps along a plant’s stem or branch where new stems/branches or even roots can sprout. Deadhead flowers just above a node to encourage more flowering. Prune a plant back to just above a node to make it smaller and bushier. Cut a soft-stemmed plant at the point just below a node and put the cutting into water or soil to develop roots. (Not all plants develop roots this way. It’s a learn-by-doing thing.)

Slip –A piece of a plant stem that’s cut off to start a new plant. More usually called a “cutting.” House plants, especially vines and climbers, are really easy to start from slips. So are many annuals, like coleus and impatiens. You can even grow herbs like mint, basil, rosemary and lavender from cuttings.