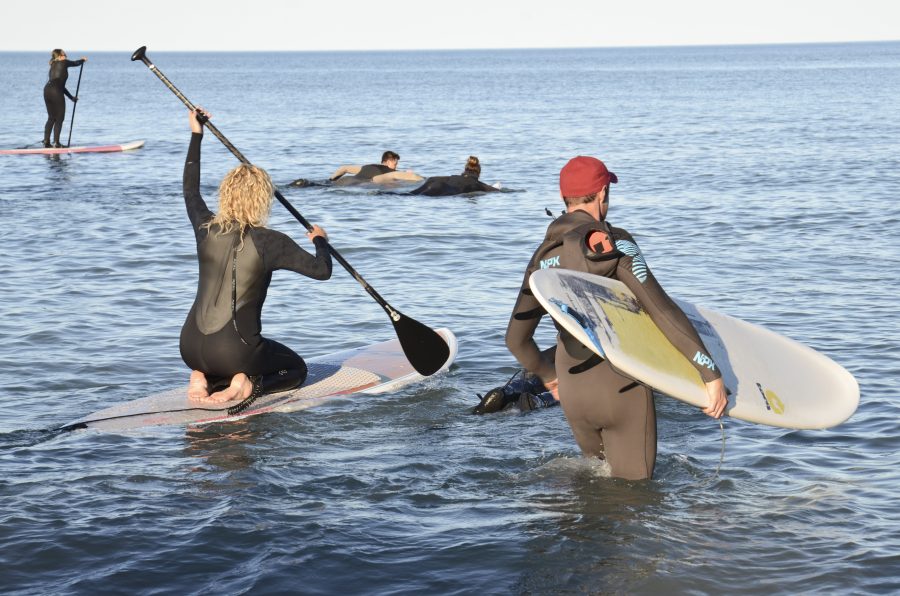 Surfers make their way into the water for a paddle out, June 7. PHOTO: Lara O'Keefe

The surf could no longer be up for some water sport enthusiasts who frequent Bluffers Park.

That’s because a plan to develop the western portion of the Scarborough coastline could cut into what local surfers say is one of the best surf spots in the city.

In early spring, surfers got wind of the plan and began calling officials to reconsider.

Now, the group is bringing their case to the public. Local surfers recently organized a ‘paddle out’ – a ritual in which surfers paddle out to a calm area of water, create a circle and hold hands to represent unity and protection – in an effort to save “Lighthouse”, a surf spot named after a small lighthouse at the entrance of the park.

More than 50 showed up to the June 7 event in support of the Scarborough Bluffs spot which Nadia Baer, a surfer who has frequented the area for more than six years, called “something special. A lot of people don’t realize that these perfect surf spots don’t happen a lot in nature and it’s a shame if we lose something that’s been so naturally produced.”

The GTA surf community is a close one with numbers of about 1,000.

Jeff Green, who has been surfing for more than 30 years in the area, said that there can be as many as 40 or 50 people out on the water at a time if the conditions are favourable.

“Lighthouse is considered one of the best waves off all of the lake,” he said.

But the natural coastline that has served them so well over the years could be receiving a facelift in the near future.

The Toronto Region Conservation Authority (TRCA) has been conducting an environmental assessment study of the Scarborough Bluffs that covers approximately 11 kilometres of the shoreline.

The project, coined the Scarborough Waterfront Project, has been split into three sections because of its scale – the west, central and east segments of the Scarborough Bluffs.

According to the TRCA, while the west segment – the area in which “Lighthouse” resides – is a popular destination for residents, visitors and surf enthusiasts, the eastern end of Bluffers Beach holds risk of bluff failure and erosion and is not safe for tourism.

To fix this, TRCA put forward nine scenarios for changes to Bluffers Park at two public consultations – a third is to be held soon.

The proposals focused on retaining the existing beach and creating a safer environment for those walking along the bluffs.

Two of these scenarios came out as the favourites – one would result in a small loss of the existing eastern portion of the beach while the other proposed to expand the beach to create a connection with the existing trail.

Ultimately, the expansion, which focuses primarily on bluff erosion protection, preventing sand from building up in the marina entrance – a process that currently requires dredging twice a year – and expanding the park space was chosen as the best option.

But after reviewing the most recent Scarborough Waterfront Project plans, surfers Green and Baer determined that the current design would greatly impact the “Lighthouse” surf break.

And while Green said he is in favour of the project and improving the safety of the area overall, he believes “more stuff needs to be explored – it’s too premature to move ahead with this project.”

Green said he believes that the design of the plan will not be effective in addressing the issue of sand build up and could further exacerbate safety issues because it could unintentionally create riptides similar to those at Ashbridges Bay, causing safety concerns for swimmers.

His concern also lies with the fact that the proposed changes could eliminate the existence of the south-west swell in the Bluffers east main beach.

Baer echoed these fears and said “it’s unfortunate that the TRCA wasn’t aware of this surf spot until late in their project development. We hope that they and the city can work together with the surf and stand up paddle community to make adjustments to their plan so that their goals can be achieved without the destruction of such a special unique surf break.”

Speaking with the Toronto Star, TRCA’s head of watershed programs Nancy Gaffney said plans were “locked down” in February, but they are willing to have a conversation with the surfers about the design. However, removing the node altogether from the plans is not an option, she said.

With files from Anna Killen.