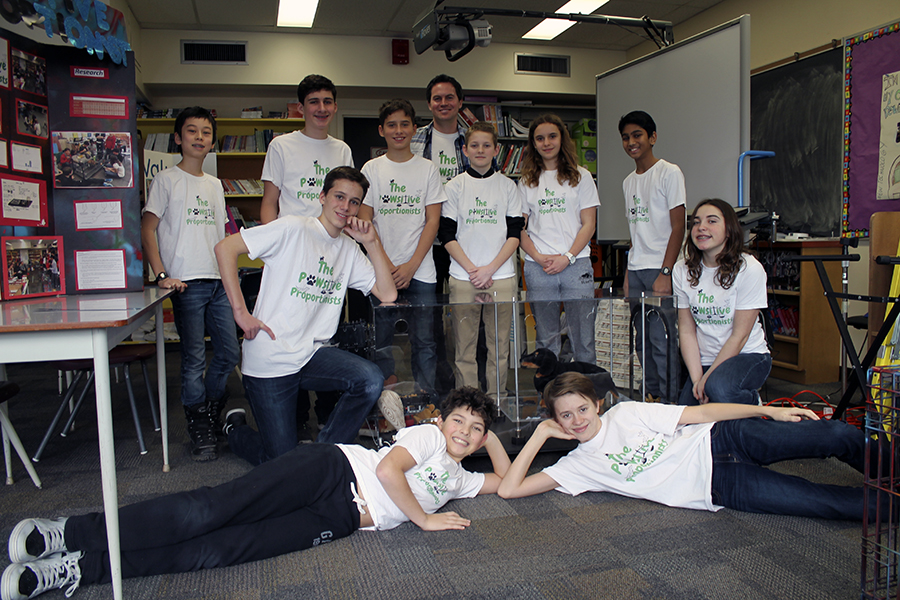 It’s a strange feeling walking into a room of middle school students and realizing the kids standing in front of you know more about science and technology than you likely ever will.

But that’s exactly what happened during a visit to Glen Ames Senior Public School on January 25. The students are part of the First Lego League (FLL) – a group that challenges kids to solve real-world problems by using innovative thinking and teamwork – and for the second year in a row the Glen Ames team, who this year call themselves the Pawsitive Proportionists, have been winning awards for their robotics invention – first winning second at the provincial competition, then placing second again and qualifying for the international competition which will take place this spring in St. Louis or California.

Each year, FLL sets a theme around which participants must work. The theme this year? Animal Allies. The challenge asks participants to identify and solve a problem in which humans and animals interact. With weight management being the number one method of increasing the lifespan of a pet, according to a 2011 Canada’s Pet Wellness Report, helping Rover regulate his diet seemed like the best way for the group to make an impact.

Drawing inspiration from coach and Glen Ames teacher Luke Martin’s mini dachshund, the team came up with the PetPortion – a device that regulates the weight of a pet by automatically doling out the appropriate amount of food based on weight and level of exercise the pet receives on a daily basis.

“So basically this year we created a device that will give mini dachshunds the proper amount of food that they need according to their weight,” explained Robbie C, team captain of the Pawsitive Proportionists. “And one important thing was that it wasn’t a diet machine. So it wasn’t making them feel like they were starved. So we slowly decreased the amount of food they were getting or increased if they were underweight.”

It may sound like a simple concept, but ask the team how they determined the correct portions and they’ll pull out a large bristol board filled with symbols and mathematical equations. The mere sight of it gave this Beach Metro reporter heart palpitations but for these kids, it’s all part of the fun.

Gathering in a group, the team wheeled over their first and second iterations of the PetPortion. What began as a simple animal cage with a scale fashioned with springs and wires has evolved to a sleek clear plastic vessel with its scale stabilized using strong magnets.

During trials involving the first model, the group learned that the scale was unstable and the wires were a potential choking hazard for the dogs, especially because the platform that served as the scale would move while the dog was standing on it. To help stabilize it and lengthen the lifespan of the product, they decided to use magnets instead of springs, which can wear out quickly and become unstable.

And the magnets they used for the project aren’t just any magnets. The team explained that they had to seek out rare earth magnets, which attract the cast iron weights they placed underneath to keep everything secure.

The improvements of the second iteration are still underway but the team also plans to include “LED lights under the scale so the owner has a clear understanding of the pets’ weight – red if the pet is overweight, yellow if it’s underweight and green if it’s the right weight,” said Robbie.

Their hope is that this invention will be enough to win them the top title in the international competition of the First Lego League but the team faces another challenge before then – raising the money to get there. To send all members to the competition it will cost anywhere between $20-30,000 so the coaches of Pawsitive Proportionists have set up a fundraising account online at www.tinyurl.com/glenamesrobotics.

Whether they win or lose the competition, it’s clear that these kids are smart. Really smart. And if they represent the future of technology, one thing is certain – we have a bright future ahead of us.