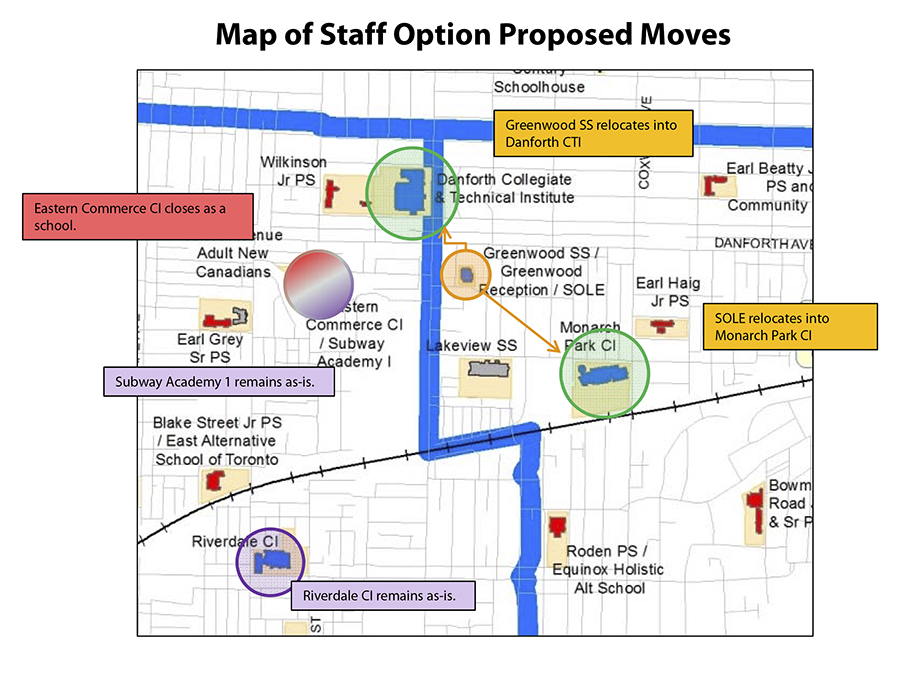 A map shows the closure of the existing Greenwood Secondary building and following mergers option proposed by TDSB staff.
Toronto District School Board

They are only blocks apart, but some big moves may be coming to four East End high schools.

Greenwood Secondary, a specialized school where about 250 newcomer students spend a few semesters improving their English before transferring to other schools, may soon move to Danforth Collegiate and have its own building sold.

At the same time, the smaller SOLE alternative school housed at Greenwood could move to nearby Monarch Park Collegiate.

That plan was presented at a Nov. 23 meeting as the best solution TDSB staff can find for a problem that sparked a review of 10 East End high schools – too many have low enrolment and empty classrooms.

“It’s not 1969 anymore,” said Mike Gallagher, the TDSB superintendent responsible for most schools in the review, referring to a baby-boom year when Toronto public schools had a population 100,000 greater than today.

“We just don’t have the students.”

The meeting was held in the cafeteria at Danforth Collegiate, the largest school in the review area. Built for as many as 2,100 students, it has less than half that number now.

Gallagher said there is enough space at Danforth to run the whole Greenwood program, and to keep it distinct.

“One of the things we heard from our staff is that the students at Greenwood love being together as a cohort,” he said.

“They really benefit from being together in a uniquely ESL-sensitive environment, and that’s something we don’t want to lose.”

Currently, Greenwood students transfer to neighbourhood schools across Toronto, so each cohort scatters every year or two.

TDSB staff hope that after improving their English, most Greenwood students will choose to stay and finish their high school diploma at Danforth.

Danforth has a wide range of program offerings that include everything from a full auto shop, a full commercial kitchen and a tourism program to arts, science and engineering classes.

To ease that transition, Gallagher said Danforth would join Greenwood and most Ontario high schools in running two semesters of courses, rather than having the same courses all year.

That would allow Greenwood students to join Danforth as soon as they finish their last semester, even if it’s mid-year.

While that is the preferred option of TDSB staff, a special committee that includes students, parents, principals, and trustees will spend the next few months coming up with its own plan, which may be different.

In the end, both plans are advisory, and the school board will make the final decision, most likely in June.

Toronto-Danforth Trustee Jennifer Story told the more than 100 people gathered at the meeting that although it can be difficult, it’s important for committee members to speak up and think creatively.

“I think it’s really important to speak your mind,” said Story, asking people not to be intimidated by the process.

If the staff option goes ahead, the average utilization rate at all 10 schools (which are housed in eight buildings), would rise from 68 to 77 per cent, which is close to the 80 to 90 per cent range the school board aims for.

At its next public meeting, the special review committee will hear a series of five-minute deputations by members of the public with an interest in the review. The meeting will run from 7 to 9 p.m. on Dec. 7 at Danforth Collegiate.