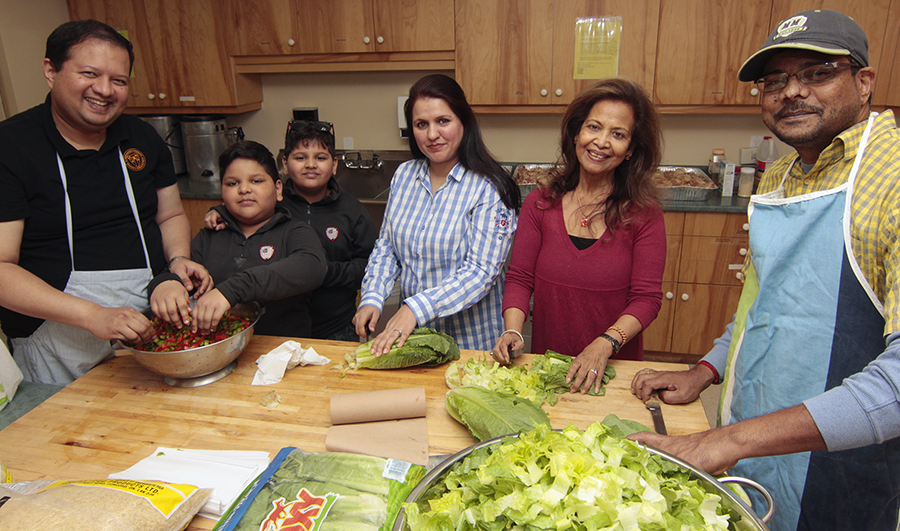 A Beacher and long-time teacher of English as a Second Language, Subhani had recently joined the board at Mennonite New Life Centre – a Toronto settlement agency with an office on Queen Street East.

That’s when Subhani’s mother, Begum Afzalun Nessa, suggested they organize a thank-you lunch for the centre’s many volunteers.

It meant cooking for some 200 people. But the lunch was a hit, and so was Subhani’s mother.

“She’s the one who couldn’t speak English, but her smile, her presence, just hugging everyone – it was amazing,” said Subhani.

In 2007, after her mother passed away, the Queen East centre named its community room in her honour, a gesture Subhani called “utterly sweet.”

Other supporters have helped keep the volunteer recognition lunch going, including Siva Chinniah, one of Subhani’s former ESL students, who has been chef for the luncheon every year.

Before this year’s event on Oct. 24, Chinniah and Subhani were joined in the kitchen by Subhani’s niece and her family, and the noted Bangladeshi poet and essayist Asad Chowdury, a relative of Subhani’s, gave a talk at the event itself.

“I admire their work, and want to do whatever I can to help them,” Subhani said.

At its North York and Scarborough locations, Zhu said New Life staff counsel newcomers on how to apply for citizenship or childcare subsidies, but they handle many questions about daily life in Toronto, too.

In recent years, Zhu said the centre has helped many newcomers from South Asia, as well as families from Afghanistan, the Philippines, and Latin America.

In volunteering with New Life, Subhani is carrying on a family tradition that goes back generations in Bangladesh – one of her grandfathers started the country’s first school for women, in Chittagong.

And Subhani is quick to highlight the role her mother played in getting the New Life event started.

“I think this message is for all mothers who have left their original homes and found a new home in Canada,” Subhani wrote.

“They must know that they are equally precious everywhere, and can impart their love to all – anytime, anywhere.”