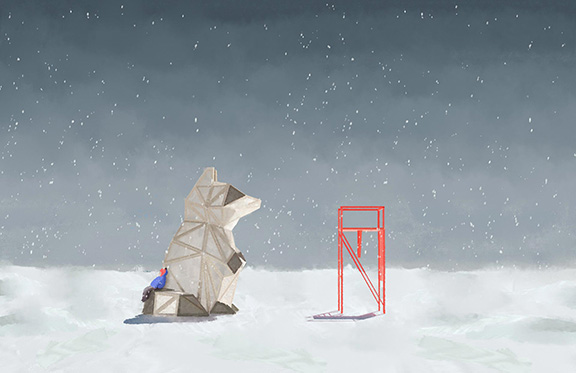 CONRAD, in honour of a Toronto raccoon that died on the corner of Yonge and Church streets in 2015, is not one of the six Winter Stations 2023 art installations that will be displayed at Woodbine Beach this winter. CONRAD will be on display in Mississauga. Images supplied by Winter Stations.

EDITOR’S NOTE: This story has been corrected from the one originally filed to reflect that the CONRAD and the (Home) installations will not be among the Winter Stations 2023 exhibits on Woodbine Beach. The CONRAD and the (Home) installations will be located at a satellite location in Mississauga sponsored by Brixen Developments. In the spring, the (Home) will be moved to Etobicoke’s Sir Casmir Gzowski Park in the Sunnyside neighbourhood sponsored by Mirabella Condominiums where it will last until the summer months. CONRAD will not move and will remain at the Mississauga location.

The winners have been selected for Winter Stations 2023, and six of the art installations will be going up along Woodbine Beach next month.

Winter Stations began in 2015 as a way to highlight the beauty of the Eastern Beaches and make them a destination point for outdoor art installations during the winter. The artworks are set up at the lifeguard stations along Woodbine Beach, and each year an international competition receives entries connected to that year’s Winter Stations’ theme.

The theme for Winter Stations 2023 is Radiance, which is defined as the quality or state of being radiant.

“Radiance is a powerful thing to harness, as it reflects brilliance, inner security, kindness, and gratitude – but it’s also unique in that it has a positive ripple effect from its origin,” said the guidelines for groups submitting designs for the Winter Stations 2023 competition. “Radiance is beautiful in the way it spreads organically. This year we want you to celebrate your growth, inner strength and freedom in defining what radiance means to you.”

The following six Winter Stations 2023 winning art installations will be displayed along Woodbine Beach from Feb. 20 to the end of March: “Radiance is a collective experience. The act of emitting and receiving positivity has an impact that reaches far beyond its origin point. LIFE LINE proposes an interactive station that materializes the transfer of joy through a shared, auditory experience,” said the designers.

“LIFE LINE references the built infrastructure of the waterfront, the linear landscape of the beach and the distant horizon line. Participants can place a ball at the top of the tube, and send it rolling through a series of windchimes, creating a captivating soundscape for others to enjoy. Listening stations along the length of the tunnel project the sound outward and allow for multiple points of engagement. The experience of LIFE LINE is playful from near and far, and interprets radiance as joy that starts with the one person and radiates outward to many.” “Three surfaces form this pavilion. The first, a pavement that marks the area on which the other two surfaces are placed. The other 2 surfaces, one smaller than the other are curved pieces that take advantage of their shapes to structure itself and at the same time open up possibilities for inhabitability or programs. The user can gather around or inside the pavilion, stand, sit, or lie on the surfaces that call to be inhabited in very different ways,” said the designers.

“The materials for the construction are very simple, modular metal frames that are covered with wooden boards. The wood gives texture to the elements, which is reinforced with bright yellow paint for the curved pieces and dark gray for the base or pavement of the pavilion. At the end of the life of the pavilion, the boards and wooden structure can be used to build other types of simple street furniture or boundaries for areas such as bridges, streets or gardens.” “As though the winter sun has split through the prisms of an icy sky, rays of colour fold around a timber tower standing proudly in the distance. Inspired by lighthouses in coastal settings across Canada and beyond, Delighthouse is a self-assured landmark guiding visitors to approach,” said the designers.

“While traditionally lighthouses are warnings, this installation is a welcoming beacon of hope, fun, energy, and pride. The confident and colourful pattern, evoking a sense of play, casts onto ground panels radiating out from the tower to embrace visitors. Scaled to house the lifeguard stand, the tower is clad in painted timber boards. Structurally, eight tapered timber frames lean inwards, joined to form the tower, with strength derived from each part coming together as a whole.” “Canoes have been a fundamental method of transportation for thousands of years. They have contributed immensely to humanity’s growth, inner strength, and freedom. Ripple Hut emulates the form of aggregated canoes and offers an alternative approach to the beauty and craft of canoe fabrication,” said the designers.

“The structural connections of the pavilion depict ripples in the water. Small apertures in the framework of the pavilion will provide framed views of the surrounding context while the composition of the shells will protect visitors from the harsh winter conditions. Radiance is expressed in the pavilion through form, materiality, and spatial interaction. Ripple Hut will be perceived differently in various contexts through haptics and the effect of light and shadow. The pavilion will serve as a place of convergence for visitors and will invite users to interact with its spatial and material conditions.” “We[AR] encourages connection, humanism, and the strength of living in community by demonstrating the power that can be achieved when a community pulls together. WE[AR] is an interactive virtual installation that considers the local and regional contexts in which it is shown to present social issues and it exemplifies the power of unity in the face of societal crises. Whether it is in Canada, the United States, Ukraine, Africa, Iran, Afghanistan or anywhere in the world it demonstrates the strength of solidarity in addressing social challenges. Human rights, women’s rights, LGBTQ2S+ rights, pay disparity, mental health, racial discrimination, and sexual violence are among the issues addressed,” said the design team.

“WE[AR] stands for a worldwide movement of solidarity and unity, and it begs us all to shine our own light to these critical societal challenges. It encourages visitors to explore the installation at their own pace, striking up conversations with other visitors and, most importantly, becoming allies to these communities. As more individuals congregate and interact with the exhibit, it leads it to respond and strengthen its look.” “Freshly fallen snow is typically seen as a blank canvas waiting for humans and animals to leave their mark on it. Winter-net looks to instead utilize snow’s ability to stick to porous surfaces as an ink for creative expression. Radiating from a central lifeguard stand, a series of layered nets woven between a structure of wooden posts filter and catch snow and sand over time as they are carried along by the wind. This accumulation inhibits light filtration and creates distinct shadows. While walking through Winter-net, participants are encouraged to interact with the nets in a similar way by covering them with snow to create a variety of forms and light conditions throughout,” said the design team.

Below is information on the installations that will not be on Woodbine Beach:

The installation is a statue of raccoon.

“Conrad was the name of a raccoon that died on the corner of Yonge and Church in the summer of 2015. And though Conrad was just a raccoon, he was human enough to inspire compassion and warmth in the hearts of Torontonians. This is a monument in his honour,” said the designers.

The CONRAD installation will be on display in Mississauga (1381 Lakeshore Rd. E.) and is sponsored by Brixen Developments. “With the world moving through major economic and political changes while still recovering from years of pandemic, we imagine the best manifestation of this year’s theme of radiance in a simple definition of ‘Home’. Home, whether it’s a space or beloved neighbourhood, is a place blessed, where one feels security, strength and freedom thus casting a radiance of inner beauty and potential to the outside world,” said the designers.

“Playing with the idea of emitting and transmitting light, we introduce a simple shaped pavilion with carved bright-coloured walls to offer a constantly changing experience throughout day and night. While the dawn light shines through the colorful glass and letters creating a vivid kaleidoscope pattern, dusk brings a completely different experience with the light originating from within and spreading its sculptured glare to the outside. The red lifeguard tower stands in the centre of the pavilion, resembling a person residing at homeplace.”

It will first be on display in Mississauga (1381 Lakeshore Rd. E.) and is sponsored by Brixen Developments. Then, the (Home) will be moved to Etobicoke’s Sir Casmir Gzowski Park in the Sunnyside neighbourhood sponsored by Mirabella Condominiums where it will last until the summer months.

The official opening ceremonies for Winter Stations 2023 will be held on Woodbine Beach on Family Day (Monday, Feb. 20).

Winter Stations was first launched by RAW Design, Ferris + Associates and Curio in 2015. Over the years it has become immensely popular with both local residents and visitors to the Beach.