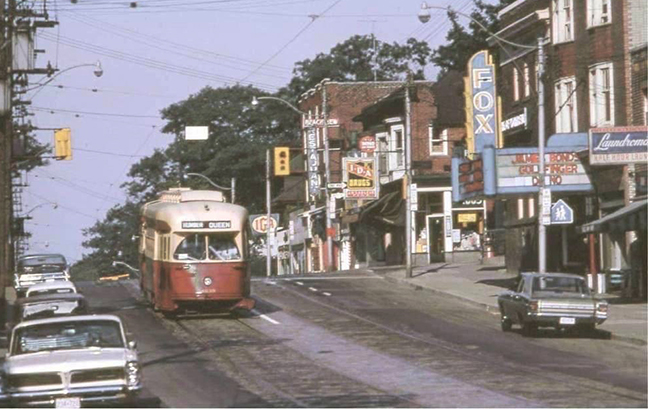 Photo above shows the Fox Theatre sign in the 1960s.

Queen Street is the beating heart of the Beach. Raise a New Year’s toast to three local favourites: the Fox Theatre, the Garden Gate Restaurant and Cobs Bread (great toasted or not).

The Fox has a stylish new marquee, a sign our old friend is here to stay.

To celebrate, general manager Kristal Cooper posted historical photos on the Fox social media asking, “Which one of these signs did the Fox Theatre have when you first came to see a movie?”

I am dating myself but I remember the grand marquee with its vertical neon sign (photo at top this article) which graced the front of the theatre until it had to be taken down in 1977.

The owner at the time, Ken Swire, told Beach Metro Community News, “It was leaking, rusting out and the lights on the Fox name wouldn’t work. It was so old it was ready to fall on somebody’s head if anyone touched it.”

The sly Fox has survived two World Wars, a Great Depression, the rise of television, a leaking roof, a pandemic and stolen kisses in the dark.

The tale of the Fox opened on April 14, 1914 as “The Theatre without a Name” holding a naming contest.

The marquee for “The Pastime” went up on April 19, but the winds of war soon brought the name “Prince Edward” in a fervour of patriotism in January of 1915.

The early canopy over the sidewalk was rather drab, but the era of neon lights would change the look of movie theatres into bright beacons of entertainment that set the night aglow in the Golden Age of Hollywood.

After the scandalous abdication of the King, the name of the theatre was changed to the Fox in 1937.

The grand opening was held on Aug. 2, 1937 with a Joan Crawford film at “Sunday midnight”. Sunday films were forbidden in Toronto the Good. You couldn’t have people enjoying themselves!

With the Beach community rallying around it, Canada’s longest continuously-operated movie theatre has been helped out through the pandemic with popcorn sales, naming rights to the seats, rentals to private parties and film shoots such as Fingernails.

Across the street since 1952 is the landmark Garden Gate Restaurant known affectionately by locals as “the Goof” because the “d” lights once went out in the big “Good Food” sign.

Stars like Matt Damon have lived in the Beach while filming.

Mila Kunis stayed here in the summer of 2021 for Luckiest Girl in the World. In a “Q and Eh” for netflixinyourneighbourhood.ca Kunis praised Toronto as “family-friendly”.

“I loved it…my kids loved it…they had the greatest summer. There’s a local bakery that we started going to so often they would like start putting things out for the kids. It was wonderful and the people there were so lovely,” she said. “I absolutely love it. I was ready to move there and then my husband reminded me about your winters…and then I chose against it, but I was down for the summers.”

January may not be the best time to sing the praises of the Beach, but we can dream about warm summer breezes by the lake.

Let’s all support local business. We can get through a long winter together!