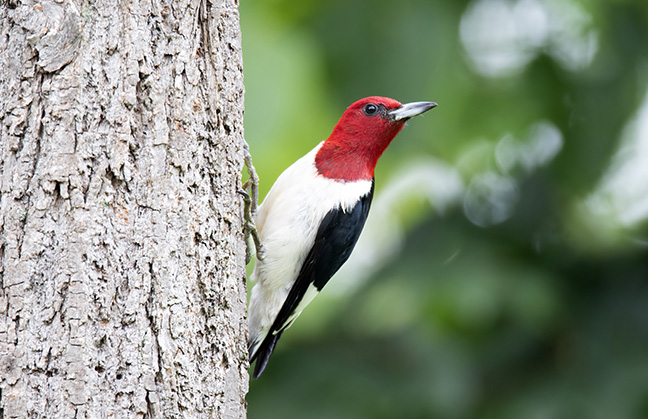 A sighting of a pair of red-headed woodpeckers just minutes from her Scarborough home was one of the highlights of 2022 for On The Wild Side columnist Ann Brokelman. Inset photos show a bald eagle and a luna moth. Photos by Ann Brokelman.

The end of another season has come, and what a wonderful year this has been.

If I try and think what the single most memorable moment of 2022 has been, I simply can’t! There are too many highlights that come to mind for me to pick only one. Like choosing a favourite movie or a favorite band, it’s far easier to decide several winners after I’ve separated my options into different categories.

In the amazing mammal category, I think the triplet fawns are the run-away winner. If you don’t know the whole story, they were born in the yard next to mine and I got to watch the first moments of their lives while hiding in my kids’ old treehouse.

From their first wobbly steps, to the doe leading them into the woods that line the Scarborough Bluffs barely an hour later, to seeing all of them, two months later, doing zoomies around the neighbourhood, this incredible experience will be a highlight for decades to come.

The most remarkable rescue this year was that of an eagle on a stranger’s front yard. I was on my way to release an American Bittern for Shades of Hope when I got a call that someone had found a giant, struggling bird on the ground.

I went to the location and found a juvenile, (about three years old) bald eagle. The poor bird was struggling to move, and I noticed right away that she was covered in fishing line and burrs. A young man stepped out of a nearby house, and I asked him for help. He threw a towel over the bird’s head, which gave me a chance to safely contain the eagle’s wings without harm. As it turns out, the poor bird was too weak to even try to fight me. This was a bad sign, made worse when I noticed how badly emaciated, he was. Despite their size, eagles are not heavy (an adult might way 10 to 12 pounds), but this bird was dangerously underweight. I took him directly to Shades of Hope Wildlife Refuge, feeling content that I’d done everything I could to give him a fighting chance.

The best bird sighting of the year was a pair of red-headed woodpeckers that nested not five minutes from where I live. The species was not a new sighting for me, (I’ve seen a few up north and around Point Pelee), but in almost two decades of birding I’d yet to see even one in the GTA. More than that, I’d never seen one on any nest before.

This beautiful bird was added to the Ontario Species at Risk list over a decade ago and was declared “endangered” in Ontario just last year. Loss of habitat is the main reason for this bird’s decline, which makes the sighting so close to my home that much more special. My fingers are crossed that their nesting was successful and that, if we’re all lucky, they’ll return for years to come and do their part to help the species recover.

My most noteworthy insect encounter was with a luna moth. Well, not one moth, but over a dozen! Over the last few years, I’ve tried to help hatch/release all the different Ontario moth and butterfly species, with great success. Luna moths are one of our many silky moths, (named for the silky material they use to make their cocoons), and one of the few that I’d never worked with before.

Luckily, a friend found a bunch of caterpillars, I painstakingly, but lovingly, guarded and watched them as they grew, ate, pooped, ate and pooped some more, pupated, hatched, and flew away onto the next part of their adventures. Absolutely stunning and ever so delicate, these amazing creatures were an absolute delight to witness.

That’s it for this year’s highlights.

Perhaps I’ll have to write one more story with the remaining categories: favourite female juvenile fox, most remarkable bird on the neighbour’s telephone pole, best moose in a supporting role, and so on.

While I find myself travelling less as the years go on, I’m noticing more how the area we live in is rich with beautiful wildlife. Open your heart and see what exists is in our very own neighbourhoods. Walk away from the computer, put the phone down, and look up at the marvels around us.