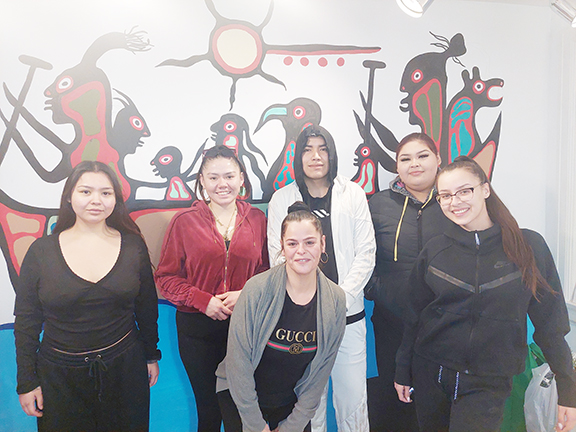 The ENAGB Indigenous Youth Agency puts the emphasis on programs for youth created by youth. ENAGB is located on Woodbine Avenue in East York. Photo: Submitted.

Following decades of having the challenges faced and the needs expressed by Indigenous youth ignored, Cynthia Bell founded the ENAGB Indigenous Youth Agency to combat the hierarchical nature of Indigenous communities as well as to give future generations a voice.

Since breaking off from a larger Indigenous organization and having its charity application approved September of 2018, the ENAGB Indigenous Youth Agency has been serving Indigenous youth starting at age 12 through to 29 from their East York location at 1005 Woodbine Ave. led by the 39, mostly youth, staff members.

ENAGB is a combined acronym for “Eshkiniigjik Naandwechigegamig”, which means a place for healing our youth, and “Aabiish Gaa Binjibaaying?” which means where did we come from?

The importance of the organization as a source of assistance and education for the Indigenous community is magnified by the lack of similar resources around their location.

“The reason we chose this location in the east is because there’s no youth program,” said Bell. “We’re technically the first ever Indigenous youth agency led by youth for youth. There are organizations in the city that have youth programming within them, but not specifically for youth. We provide services and programming through 12 and 29. And then we have our early-ons for zero to six.”

ENAGB hopes to shore up the gap that currently exists for those aged 7 to 11 years old.

Twenty-five years ago, at a meeting with the elders on her reservation to discuss a recent suicide, Bell tried to offer a number of suggestions to the problems faced by the younger members of the community.

“Being a youth, it’s really intimidating to speak out because it’s always adults and elders who lead communities.”

In response to having the issues brought to elders by Bell and her peers due to their reactive as opposed to proactive methods, she strived to launch a foundation that put Indigenous youth at the forefront and was represented by its own youth council.

In addition to suggesting a youth council, Bell also proposed more flexible program hours, to cater to a wider range of people, as well as inviting the elders to outdoor excursions such as volleyball or swimming to engender a genuine connection and relationship with the youth.

Bell didn’t let the dismissive responses deter her. In fact, she said those responses may have made her even more determined to launch her own organization.

The services provided at ENAGB range from training and employment to housing support to programs designed to provide cultural and historical education to help Indigenous youth connect to their roots.

The key to ENAGB is that the programs and services offered are created and curated for young people by young people through the youth council.

“People think that when I speak on behalf of the youth that I’m speaking with my own voice,” said Bell. “But every month for the past 10 years, I would meet with youth through youth council meetings, and I would sit with youth and hear what they say, what their needs are and wants are.”

The ages served are spread fairly equally although case management is the most heavily utilized service offered at ENAGB, said Bell.

Despite the key role Bell plays at ENAGB, she prefers to remain behind-the-scenes and place the youth, both in the council and those they serve, in the foreground. That humility, which is a key concept at ENAGB, is highlighted by Bell’s stated goal for the charitable organization which is to put itself out of business.

“At some point, our youth will be able to walk with pride, have their own culture and they’ve claimed it already,” said Bell. “They won’t need to heal anymore, because they know healthy choices, healthy lifestyle, healthy everything. That, eventually, is one of our biggest goals.”

Bell acknowledged how large of a task her goal entails due to intergenerational trauma exacerbated by sexual and drug abuse, insulated and isolated communities and cultural loss and assimilation all stemming from being forced to live on reservations.

“That’s probably like 150 years from now,” said Bell. “The ultimate goal is to be able to get to know who they are, where they come from, and then to be able to lead their community, and contribute to society.”

One of the key ways to connect to one’s culture is to learn the language. In addition to all the work she does for ENAGB, Bell also teaches Odawa Ojibwe language for the Toronto District School Board both out of love and due to lack of qualified instructors.

“I teach two classes for high school students,” said Bell. “It’s really sad because it’s close to becoming extinct. My community has a high number of fluent speakers, but when you think of the ones that are coming…I could barely have a handful of people who are under 40 who speak my language, which is the Odawa Ojibwe.”

Despite the long-term nature of some of ENAGB’s ambitions, the immediate goal for Bell is to ensure she passes down her knowledge to the next generation.

“Because that, again, is transitioning, a transmission of knowledge. And that’s really important because I don’t want to pass away with all my knowledge. I want to give as much as I can,” she said.

“That’s what we call wisdom and it is one of our seven grandfather teachings. True wisdom is being, and knowing, that you’re dispensable and sharing it with the next generation.”

To learn more about the ENAGB Indigenous Youth Agency, please go to https://enagb-iya.ca/