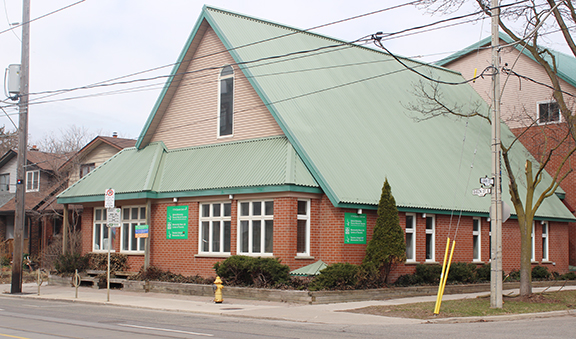 Antisemitic graffiti was found written on the sidewalk in front of the Toronto United Mennonite Church, 1774 Queen St E., on the morning of Tuesday, Dec. 13. Police are investigating the incident.

Toronto police are investigating after antisemitic graffiti was found written on a sidewalk in front of a church on Queen Street East in the Beach earlier this week.

The graffiti was written on the sidewalk in front of the Toronto United Mennonite Church, 1774 Queen St E., on the morning of Tuesday, Dec. 13.

“Unacceptable. This horrible antisemitism was brought to my attn today and was immediately escalated for removal,” said Beaches-East York Councillor Brad Bradford on Twitter later that day, once he had been made aware of the graffiti.

“I’m continuing to work with City Staff & community to get this addressed. We need to do all we can to keep tackling the alarming increase of antisemitism in Toronto,” he said in the tweet.

Beaches-East York MPP Mary-Margaret McMahon also condemned the graffiti in a tweet. “Antisemitic, racist language has no place in any neighbourhood. We will work together to tackle unacceptable antisemitism in BEY and across Toronto,” she said.