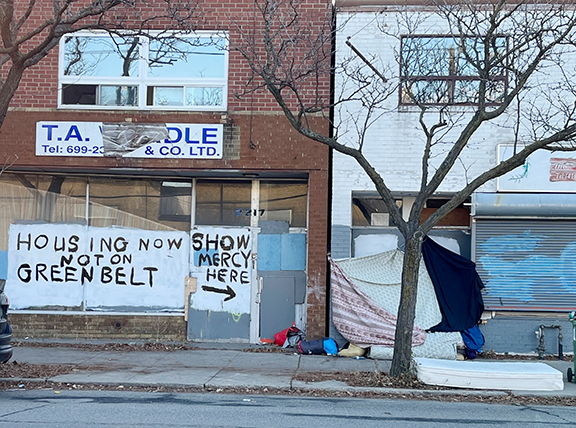 Attention has been drawn to a shelter in a doorway on Gerrard Street East near Main Street. The sign on the neighbouring empty building has an arrow towards the shelter in the doorway and asks people to show mercy to the person in it. The sign is believed to have been painted sometime on Dec. 8. Photo by Alan Shackleton.

Nobody seems to know much if anything about the person (or persons) who has set up a shelter inside the doorway of an empty building on Gerrard Street East in the Upper Beach.

The shelter, covered by blankets and sleeping bags over the doorway, has been at the entrance to the building at 2215 Gerrard St. E. (just east of Main Street) for several months.

As the weather became colder, people started dropping off blankets, sleeping bags and food donations for the person(s) in the shelter.

However, none of the neighbouring businesses know anything about who is there as the person(s) has not made themselves known to them.

“Never see anybody during the day. Maybe they come outside at night,” said one local business owner located nearby.

The shelter has risen in prominence and its location made much more obvious by a sign painted on the wall of the building at 2217 Gerrard St. E. that is believed to have been created during the night or morning of Thursday, Dec. 8.

The sign says in big black letters: “Housing Now. Not on Greenbelt. Show Mercy.” There is also a large arrow on the newly painted sign pointing directly to the shelter in the doorway.

The buildings at 2217 and 2215 are part of what had once been planned as a condo development and have been sitting empty for a number of years, though the doors have been secured to stop people from entering them.

Beach Metro Community News tried to talk to the person in the shelter on the morning of Dec. 8. The person, who appeared to be a young man, was sleeping and did not acknowledge the presence of the reporter or make any effort to wake up.

It is estimated that there are as many as 10,000 people in Toronto who each night are considered homeless, according to the Fred Victor social service charitable organization. That number of 10,000 is made up of people in shelters, sleeping outdoors, in emergency respite centres, in health centres, or in correctional facilities, according to Fred Victor.

Beach Metro Community News will continue to follow this story regarding the wellbeing of the person in the doorway as more information becomes available. Any local residents who can help the newspaper with this story are asked to contact editor Alan Shackleton at 416-698-1164, ext. 23 or by email at alan@beachmetro.com