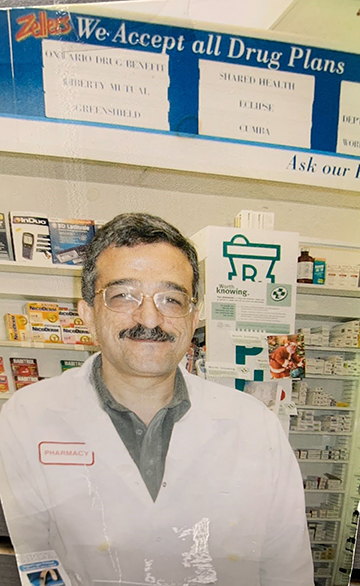 Photo above, pharmacist Abraam Rofael is shown in photo above when he was at the Zeller's pharmacy in Shoppers World Danforth. Inset photo shows him in 2021 at the Care and Health Pharmacy on Danforth Avenue. Photos: Submitted.

Longtime East Toronto pharmacist Abraam Rofael is being remembered by his customers and family as the one-year anniversary of his death approaches.

Rofael ran the Care and Health Pharmacy on Danforth Avenue, between Dawes Road and Victoria Park Avenue, and was one of the first pharmacies in the province to start administering COVID-19 vaccine shots.

Prior to running Care and Health, Rofael had been the pharmacist in the Zellers at Shoppers World at Victoria Park and Danforth Avenues so he was already well-known and respected in the community.

“He exemplified what a good proprietor should be. He dispensed not only sound medical advice but got to know his customers personally,” wrote Rogers.

“He would invariably ask about my health with real interest and was unfailingly kind. He also went about and beyond his duties, personally delivering to me on more than one occasion and after hours.”

That sense of duty was shown in 2021, the last year of Rofael’s life, as he continued to work at the pharmacy making sure vaccination shots were given out to all who needed them even though he was fighting the final stages of cancer.

“Everyone knew him and was really grateful to him,” said daughter Marina who continues to run the pharmacy. “He was 100 per cent committed to his customers.” In a note to Beach Metro Community News,  daughter Yostina Rofael said her father was far more than just a pharmacist to his many customers.

“We cannot be more thankful for who we were blessed to have as a father. He taught us so many life lessons but mainly about strong work ethic, how to maintain humility, and to always treat every stranger and patient with kindness and compassion,” she wrote.

“He was much more than a pharmacist to many of the customers and patients, and even those who had moved out of the Danforth area would travel so far to keep supporting his pharmacy, We even have patients from Barrie. He tried to provide as many services to his community and always went above and beyond to make sure his patients got the care they needed and deserved.”