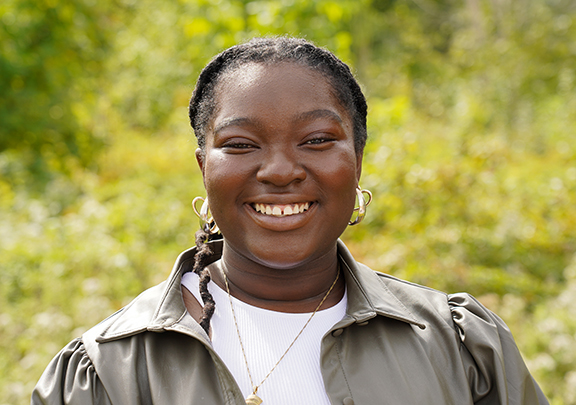 Shahaddah Jack, 18, was recently named National Youth of the Year by the Boys and Girls Club of Canada (BGC Canada). Photo by Matthew Tavares.

An 18-year-old East Toronto poet, Shahaddah Jack, was announced as the Boys and Girls Club  of Canada’s (BGC Canada) National Youth of the Year recently.

Jack, who has a long history of community service with the organization, was rewarded for her efforts which stem as far back as her early days in high school where she was known as a community leader amongst her peers.

Jack’s innate desire to be a champion of the Black community led the teenager to create the first Black Students Association that her school at the time, East York Collegiate Institute, ever had.

This community of students hosted assemblies for various discussions about anti-Black racism, cultural food initiatives, invited speakers from other associations and universities, as well as exposed youth to scholarship opportunities.

Although Jack acknowledges the benefits of her opportunities growing up, her poetry highlights the lack of opportunity that she has witnessed amongst her fellow Black men and women.

She told Beach Metro Community News that the events put together for Black youth at her high school served as a way to ensure that “students had a safe space to express themselves”.

Jack is no stranger to the will to express oneself. When her mother went into a coma in the summer of 2019, the young poet was temporarily propelled into a life of independence. Growing up as an only child in a single parent home, the bond with her mother, who she describes as her biggest influence, was one based on true friendship and admiration.

“I had to navigate not having my mother,” Jack said. “And I was just starting high school – in a [facility] where not a lot of people looked like me.”

Although, during this trying period, she had support from BGC where her mother serves as the Program Coordinator at BGC Eastview, the experience shaped the way in which she viewed the world and heavily influenced her poetry moving forward.

“Now that I’ve had time to reflect on it, it definitely changed my poetry,” said Jack.

While her mother was in the hospital for months, unable to speak, Jack wrote a piece titled Chained To The Streets which is part of her five-track spoken word EP Underrated Royalty that was released earlier this year. The poem highlights the fear of a woman raising a Black child in the current state of the world – the uncertainty of their day-to-day safety.

“This piece was heavily about police brutality and not just how it affects Black men but the perspective of Black women as well,” she said. “That was one of my rawest, most honest pieces.”

Chained To The Streets, said Jack, also emphasizes the need to prevent societal stereotypes from instilling fear in individuals. It encourages a sort of acceptance of the possibilities that come with this identity, Black, as well as “how to overcome [the fears] as a woman, because as a Black woman these are worries that we will always carry”.

“At some point in your life you’re going to have these fears and have these struggles,” she said. “But how do you overcome it and choose Black joy over Black trauma?”

Jack said that during this period of her mother’s hospitalization, her work gained more maturity than it had prior to that traumatic event. She was perhaps forced to view the world through her mother’s eyes as she stared in the face of adulthood.

Today, it appears her past is still shaping the present as Jack’s poetry shifts towards a conversation of womanhood. Her earlier work was based on the idea of discovering one’s place in society as a Black youth. She believes her experiences have helped her gain that knowledge and is now focused on the next chapter of her life – the experience of the Black woman.

As she simultaneously pursues a journalism degree at Toronto Metropolitan University, her aim is to focus on highlighting Black poets, such as herself, who speak about the Black experience and the resilience that accompanies it.

“There are a few things I like to say,” said Jack. “Our pain is our power. Our beauty is our story. Life is a journey and at some point you must take things in your life and work them into lessons. But that comes with time.”

Jack’s latest book Underrated Royalty is available on Amazon and at House of Moses (Kensington Market). The five-track audio version of the project is also available on Spotify and Apple Music and other online streaming services.