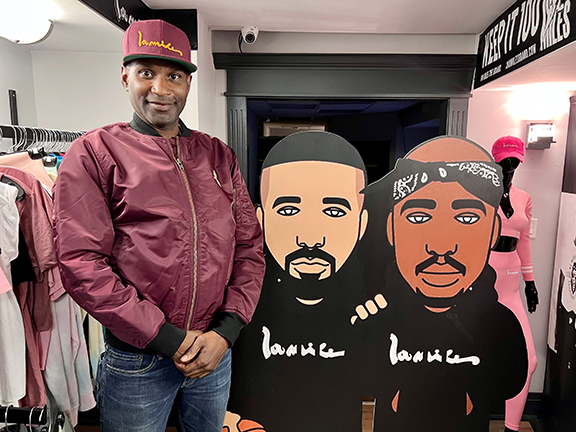 Garie ‘Miles’ Adamson at his 100 Miles store on Queen Street East in the Beach. Photo by Mimi Liliefeldt.

In a perfect world every child would have someone who believes in them; someone who shows them what’s possible and gives them direction. Garie ‘Miles’ Adamson, the owner of 100 Miles the high-end streetwear brand at 2359 Queen St. E. in the Beach, was lucky enough to have a whole community of people who believed in him.

Garie was born in Jamaica and immigrated to Canada with his parents and older brother when he was two years old; his two younger sisters were born after they arrived. When I asked if he was close to his family, his response was, “Of course! They’re the ones that I vent to and show the new designs to, they’re my critics and have been my advisors. They’ve been with me through my whole journey.”

The importance of support and guidance cannot be underestimated, particularly when you see yourself reflected in your mentor. Garie went to high school at Lester B Pearson Collegiate Institute in Scarborough and had a Black business teacher who he said, “Really inspired us to pursue business and take business courses and that’s what directed me.”

After high school Garie went to Toronto Metropolitan University (previously known as Ryerson) and motivated by his teacher, did in fact take business. “I was in a marketing lecture and the prof said, ‘Whatever you want to do, you better start it now’. I took it literally and here we are now.”

The first 100 Miles store opened in 1992 on Yonge Street which Garie told me was his happiest memory. “It opened with CP24 and all the cameras on me,” he said with great pride. “I felt that there was a void in the fashion world for Black designers, especially in Canada. And us (Black people) being such trend setters, always so inclined with fashion I felt that we needed a voice and so I became the loudspeaker.”

Ever the innovator, on opening day Garie had a couple of New York based Hip Hop artists join him to help bring the hype and attention to his store. In today’s world this type of promotional move is standard but in Toronto in 1992 it was a rarity. The event was a success and word began to spread throughout the Hip Hop community and then the famed duo Kid N Play approached him and connected him to Uptown records; from there it was a fast trajectory to meeting a number of celebrities who liked his brand and what he was doing for the Black fashion industry.

At only 20 years old (at the time) he said, “It blew up too fast. There was no guidance, it was just trial and error. They treated me like a celebrity and a lot of times I felt like an actor. I was acting the role like I’m supposed to be here!”

The biggest break came when famed rapper Tupac Shakur wore Garie’s iconic 100 Miles black hoodie in his film Above the Rim. Since then, he has had a steady stream of growth and notoriety, even Canadian celebrity Drake was photographed wearing the same black hoodie when the Raptors won Game 6 in their playoff run against the Milwaukee Bucks. This kind of free publicity is a marketer’s dream.

But throughout all the hype, Garie himself remains a grounded individual. He shared the truths about his family and how difficult it was for his parents to immigrate to Canada. “It was really rough for them. They came here with really no insight on the North American way of living . . . They worked hard for everything they achieved.”

As he talked it was evident that his love, admiration, and gratitude for his parents, his grandmother and God were abundant. Sadly, his dad passed away unexpectedly 18 years ago. “He was on a business trip, and I was the one that got the call that he had passed. It was sudden, he had a heart attack.”

But through the wins and losses of life, Garie continues to strive for better. “I feel that there is always something to accomplish; however, I am very proud of the progress I have made over the past 30 years in the clothing business,” he said.

The elevation of Black youth is also very important to him. “Anytime we have the opportunity to do speaking engagements or sponsorships we’re always involved . . . we do a lot.”

The speaking engagements are especially powerful when you consider the guidance Garie was given at a young age. When he speaks to Black youth about building his business and what is possible with hard work and support, he pays the gift forward. “I would not be where I am today if Mr. Borell (his high school teacher) and my university professor weren’t so influential,” he said.

As satisfying it is to see his store and online store doing well, everyday he is still faced with challenges; everything from enlightening the public that he is not a “Black only” brand, to the task of actually running his business.

Garie spreads himself thin as he works on new designs with his graphics team, markets the brand, inspects the quality of the products, deals with the accounting and the shipment of sales. When I exclaim how busy he must be he says with a smile, “And tired. But it’s mine.”

I understand the pride he must feel and the importance of working hard to maintain the level of distinction he has acquired. This is particularly meaningful when you consider his parent’s immigration from Jamaica and working hard to raise a family with four children. Because sometimes no matter how far you’ve come, when you’re Black in our society it’s difficult to shake off racial biases.

Garie told me a story to illustrate this point:  “I drive a BMW and I went into my car in the summertime, and a lady was buying some hats (in his store). And she said, ‘That’s your car?!’ and I said, ‘Yeah, that’s my car.’ Then she said, ‘You don’t sell drugs, do you?’ I cracked up, I started laughing. I’m (thinking) like you just bought hats from me. . . and now you’re asking me now if I’m a drug dealer because of my car.”

He told me, “This is the reason why I got into business is to educate people like this. We gotta kill these stereotypes. It’s OK for us to be successful and have nice cars and nice things. It doesn’t mean you fit this label because of your skin colour. . . We can be whatever we want to be, it’s just that people’s perceptions have got to change.”

And change is happening, we are pushing the needle forward, though often times not fast enough. Not fast enough to save lives, change circumstances, or prevent these types of micro aggressions, but each step in the right direction counts. Every one of us needs to make an effort to incite change, in smaller ways like raising our awareness and in bigger ways like speaking out and voting to fight systemic racism. We need to work together and believe in each other to go the distance.