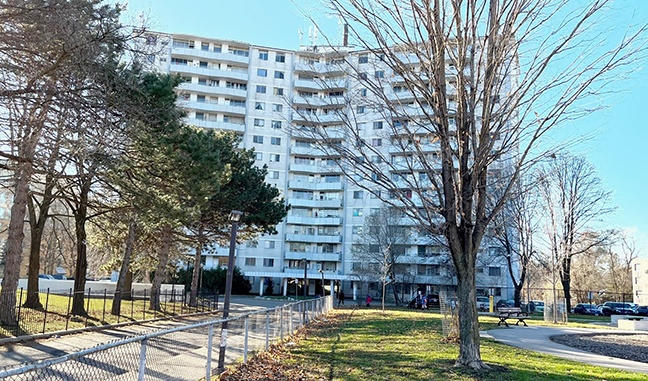 The Toronto and East York Property Standards Panel has rejected an appeal by the landlord at 500 Dawes Rd. for more time to make mandated repairs. Photo by Alan Shackleton.

The Toronto and East York Property Standards Panel denied landlord Carolyn Kreb’s appeal for a six-month extension on the mandated repairs on her apartment building.

The apartment building at 500 Dawes Rd. has a notorious history. Complaints about rat infestations, feces, roaches, bed bugs and much more stem as far back as 2006 when former Beaches-East York Councilor Janet Davies threatened that the matter would be moved to court if Kreb didn’t bring the building up to standard.

More than 15 years later and things appear to have worsened with still no government intervention.

“Whether the city will pursue fines, complete the work themselves, apply the bill to the Owner’s Tax Roll and register a lien on the property was beyond the committee’s jurisdiction,” said Ryan Endoh, a long-time tenant, of the panel’s hearing that took place on Monday, Nov. 21.

The City of Toronto’s Municipal Licencing and Standards database shows that in the past couple years, there have been 129 complaints for property standards related issues by 500 Dawes Rd. tenants.

Their recent complaints, however, have surpassed just sanitary concerns. In a letter to the property standards panel, they reported that the building’s foundation appears to be sinking which pivots the conversation to one about tenant safety.

The building has been unable to receive a passing score by RentSafeTO ever since the program’s inception in 2020.

The numerous complaints led to a City of Toronto inspection which discovered the building had 84 property standards violations. These include issues such as an overflowing garbage area, holes and cracks in the walls throughout the building, defective plumbing system, and defective or unprotected lighting fixtures.

In many cases, tenants are also unable to use the laundry facility, access parking, or use the 14-storey building’s elevators.

“After over a decade of complaining to Municipal Licensing and Standards, [tenants] have started to question the propriety of the laws and administrative institutions that are supposed to protect them and promote and enforce best practices for individuals and corporations that house human beings,” said Endoh in his letter to the property standards panel, asking them to reject Kreb’s appeal for more time to make repairs.

Endoh, as well as the tenants who co-signed the letter written on their behalf, expressed confusion as to why the City of Toronto has taken no action against their landlord over so many years.

Krebs placed some of the blame of the building’s current state on the tenants. In her appeal letter to the panel, she said that meeting the City’s standards has been difficult due to COVID-19, contractors lack of supplies, and “the nature of the building’s tenants”.

“There are some tenants that don’t have the ability to maintain their units properly,” said Endoh. “There are some that bring all sorts of people into the building. But at the end of the day, it’s her responsibility as a property owner to ensure that the building meets property standards and that tenants are also respecting the common spaces in the building.”

Endoh believes that passing blame onto tenants for things like urine or other bodily fluids found in the halls and elevators is irresponsible as it is the landlord’s duty to do due diligence and ensure the people  in the building are capable of living harmoniously with their neighbours.

“I find it funny that she’s criticizing tenants of the building,” said Endoh. “Tenants that she doesn’t vet. Anybody can move in and bring whoever to this building.”

It is currently unclear what the next steps will be in regards to addressing the violations. Beach Metro Community News reached out to Carolyn Kreb for comment but has, so far, received no response.