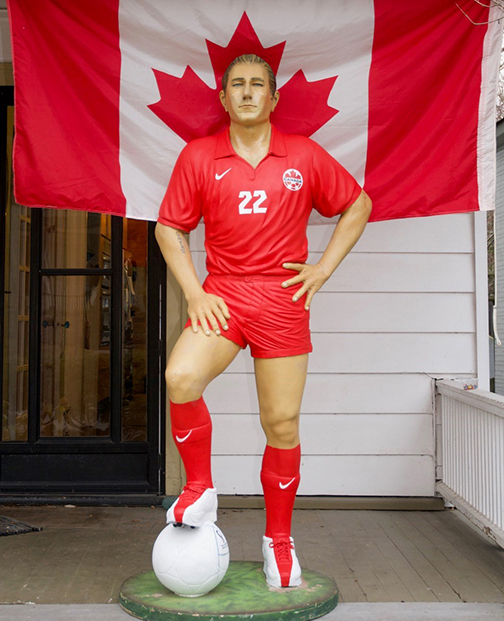 Moose will be on the porch of Beach resident Les Jones' house this month as the Canadian men's soccer team takes part in the World Cup in Qatar starting this month. Photo: Submitted.

With the kick off for the men’s World Cup of soccer set for Sunday, Nov. 20, East Toronto sports fans are gearing up for the tournament which will for the first time since 1986 see Canada taking part.

Being played in Qatar, the World Cup is also expected to bring a late November/early December boost to business for local pubs and sports bars showing live games on their many television screens as fans gather to watch their favourite teams

“People have been talking about this World Cup for months and now it’s finally here. There’s a lot of excitement for it with Canada being in it. We already have reservations for the first Canada game on Nov. 23,” said Dana Kerbel, owner of The Gull and Firkin pub on Queen Street East in the Beach.

Also shaping up to be a big draw at The Gull and Firkin will be England’s opening World Cup match early on the morning of Monday, Nov. 21, against Iran. That match kicks off at 8 a.m.

“That will be a big one for us and there’s a lot of interest in it,” said Kerbel, as the pub is considered a popular gathering spot for fans of England.

And for those looking for a breakfast pint as they watch the morning games, bars in Toronto can legally serve alcohol as of 9 a.m. There are plans in the works for Toronto Council to move the serving hours up to 8 a.m. for the duration of the World Cup, but that is not expected to be approved until the middle of next week. UPDATE: Since this story was first posted, the Alcohol and Gaming Commission of Ontario announced on Nov. 18 that alcohol can now be served legally starting at 7 a.m. for the duration of the World Cup at licensed establishments.

“Everybody is 100 per cent excited that Canada is in this one,” said Kerbel. “This one is going to be a really special World Cup.”

Played every four years, there are 32 teams in the 2022 World Cup. Defending 2018 World Cup champs are France, who beat Croatia 4-2 in the final played in Russia.

This year’s World Cup final is set for the morning of Dec. 18.

Predicting who will be playing for the championship is a challenge, said John Hendriks who is president of the Cherry Beach Soccer Club.

He said his top five teams would be Brazil, Argentina, Belgium, England and the Netherlands.

“I’d say the Dutch as an outside chance. They are my number five team,” said Hendriks who has Dutch and South African heritage.

He said the excitement among members of the Cherry Beach Soccer Club is high as the tournament’s start approaches.

As for Canada’s chances of getting out of Group F and qualifying for the second round, called the Round of 16, Hendriks said they are not great.

“Canada is in very tough. Belgium and Croatia are very good and so is Morocco,” he said of Group F.

However, this Canadian team surprised (if not shocked) the soccer experts by winning the CONCACAF division (which includes teams from North and Central America and the Caribbean) and qualifying for the World Cup in the first place. On the way, Canada beat perennial World Cup qualifiers Mexico and the United States.

“We are in a tough group, but look we beat Mexico and that wasn’t expected,” said Hendriks. “Who knows…”

Beach resident Les Jones, who was at the 1986 World Cup in Mexico and watched the Canadian team play there, said he agrees Canada is in a very competitive Group F in Qatar.

“I think we have more of a hope of success than a chance, but many people have underrated this team,” said Jones. “They didn’t really think they would win CONCACAF and make the World Cup, so who knows…”

Jones was a photographer for the Canadian Soccer Association for decades and also created the book Soccer: Canada’s National Sport. Jones has also been a director of with the Robbie International Soccer Tournament that is has been taking place in Scarborough for more than 50 years, and also served as the chair of The Soccer Hall of Fame and Museum in Vaughan.

While some outside of Canada may claim the team got lucky, and took advantage of some homes games played in extremely cold weather, this Canadian team does have the ability and belief in itself to pull of some upsets.

“I don’t think luck has much to do with how well we have done,” said Jones of the Canadian team. “(Coach) John Herdman has transformed this team. We are also in what some are calling a Golden Generation of Canadian soccer players. For once we really have some great forwards and players who can score…John Herdman’s motto is Fear Nothing.”

To celebrate, he put up a statue of a life-sized Canadian soccer player on the porch of his home in the Beach. He said the player, who he calls Moose, will be on the porch while the World Cup is taking place and he’s looking forward to watching Canada’s first match against Belgium.

“We’ll put Moose out for the duration and there will also be Canadian flags as well,” said of his World Cup plans for the house.

Jones pointed out there is a long soccer tradition in the Beach, and that the Canadian championship game of 1910 was played at the site of the old Scarboro Beach Amusement Park.

As for who will win the 2022 World Cup, Jones said it’s “wide open” but he sees Brazil and Argentina as strong contenders.