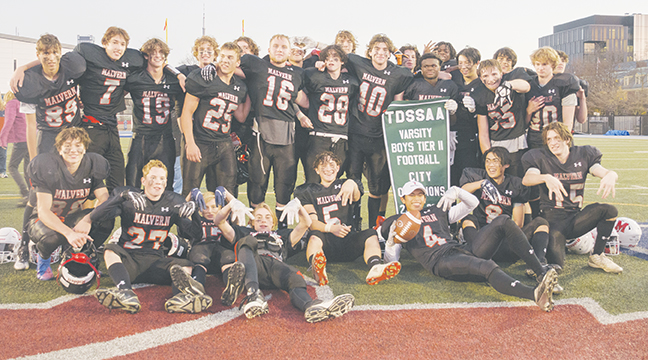 Malvern beat Lakeshore Collegiate 31-8 in the championship game played on the afternoon of Thursday, Nov. 10, at the University of Toronto’s Varsity Stadium.

The championship victory capped off an undefeated 5-0 season for the Black Knights, who competed in the Toronto District Secondary Schools Athletic Association Tier 2 Varsity League along with Lakeshore and Newtonbrook Secondary School.

In Thursday’s championship tilt, Malvern was led by Adrian Wing who scored two touchdowns and was named the game’s Most Valuable Player.

Along with Wing, other Malvern touchdowns were scored by Dajuan Burke and Ethan Macmillan. Henry Burrill-Miller also kicked a field goal for the Black Knights.

This was Malvern’s first season back on the football field after a two-year layoff due to the COVID-19 pandemic.

Coaches for Malvern are Rob Salvatore and Carter Livingstone.