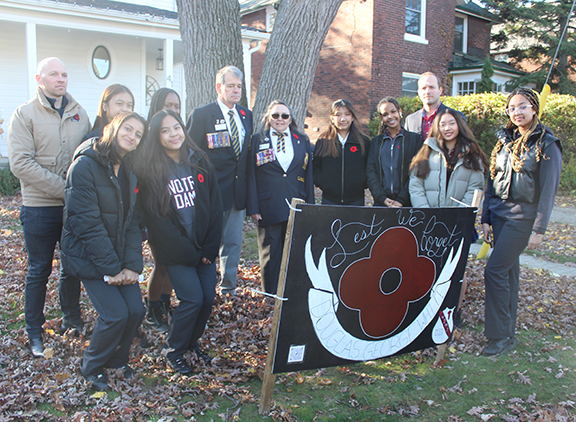 A Walk to Remember participants stop at what had once been the Lyall Avenue home of Douglas George White. A member of the Royal Canadian Air Force during the Second World War, White died on Nov. 2, 1944 at the age of 25.

As Notre Dame Catholic High School students took a walk around the streets of the school’s neighbourhood two days before Remembrance Day, they and those with them came to realize it was a walk many young men made for the last time before they headed off to serve their country and make the ultimate sacrifice for freedom.

A Walk to Remember was a project undertaken by students at the school this fall as part of their Remembrance Day studies.

Teacher Evan Smith led the project which saw students research young soldiers who had lived in the Upper Beach neighbourhood bounded by Main Street to the west, Lawlor Avenue to the east, Gerrard Street East to the north and Kingston Road to the south.

What they found was the addresses of 23 local young men who had died in either the First World War or Second World War.

‘He was a student like you and would have walked to school on these streets,” said Smith as he spoke in front of a Lyall Avenue house which had been the home of one of those young men.

“This is the path he would have taken for the last time, and he did not come back.”

A Walk to Remember saw students come together to create lawn posters that would be displayed in front of what had once been the homes of those young men. Each poster includes a QR code which links to a website with information about that particular soldier, sailor or airman.

Smith said that in at least one of the addresses a link could still be found between the families that owned the homes in the times of the First World War and Second World War. He said the current owners believed they had bought their home a number of years ago from a person with the same last name.

“Of all the people we asked about putting up the lawn posters, none said no,” said Smith.

The posters feature a red poppy on a black background with a white ribbon area featuring the name of the young man who died in service, along with the QR code and Notre Dame’s logo.

For art students involved it became an important project to create not just a painting but to learn more about Remembrance Day and the neighbourhood’s history.

“It started out as a class project and then we volunteered to do some of the painting,” said Grade 10 art student Iyobosa Johnbull-Obaseki.

“I feel the art became important to us and to community history…It made us realize they did not come home and that was hard but it’s good for the community to see.

Alyssa Belanger, a Grade 11 art student, said the design of the posters was a team effort, and she was moved by the reaction to them from the families that agreed to have them displayed on their properties.

“The people who live in the homes now, when we came around and told them about this — some of them had kids and that really hit home,” she said.

“It’s important that we honour and remember them, and we were honoured to be part of this student remembrance,” added Belanger.

“Their sacrifices mean we are free and have our democratic rights,” Smith told those taking part in the walk. “We get to enjoy a great life because of their sacrifices.”