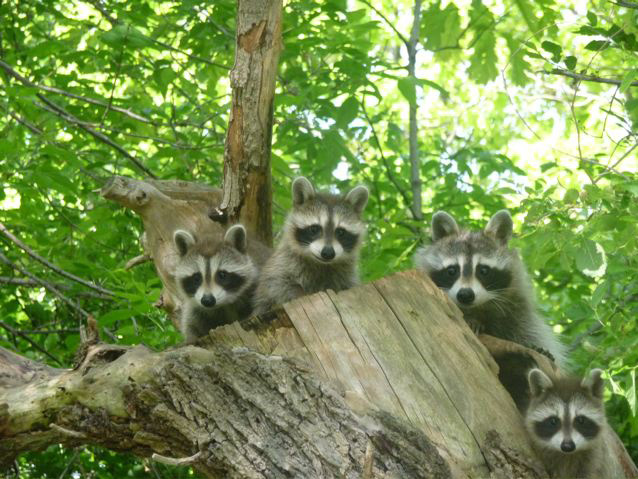 A group of raccoons are shown in this Beach Metro Community News file photo.

Ward 14 Toronto-Danforth Councillor Paula Fletcher has sent a letter to the city’s municipal standards and animal services departments regarding the increasing number of dead raccoon bodies that need to be collected and removed from her ward and other areas in Toronto.

Fletcher’s East Toronto ward goes east from the Don River to Coxwell Avenue and then south from approximately O’Connor Avenue to Lake Ontario.

In her Nov. 3 letter,  Fletcher said there have been reports of a distemper outbreak among Toronto’s raccoon population and this is leading to a large number of service calls to the city by residents regarding injured and deceased animals.

“I am writing to you today about the recent increase in the number of 311 Service Requests regarding injured or deceased wildlife across the City but particularly in Ward 14, and reports of an outbreak of distemper amongst the City’s Raccoon population,” wrote Fletcher in the letter to Carleton Grant, Executive Director Municipal Licensing and Standards City of Toronto; and Dr. Esther Attard, Director Animal Services Municipal Licensing and Standards City of Toronto.

“Over the months of September the number of 311 calls for injured or deceased wildlife has skyrocketed. After almost none in the first eight months of the year in September there over 400 calls in Ward 14 alone and 500 calls in October,” wrote Fletcher in her letter.

“I am sure this issue extends beyond Ward 14 to the entire City. I understand from Animal Services that this may be being driven by a distemper outbreak amongst the City’s Raccoon population. The sudden increase has placed a strain on Animal Services officers and increased the response times beyond the approved service standard.”

Fletcher said extra resources are needed to bring down the response times for collecting the cadavers of dead wildlife reported in Toronto.

She also expressed concern about the dangers of the distemper outbreak among raccoons spreading to other animals including domesticated pets.

“What extra resources are needed to bring down response times, and what measures have or could be taken to ensure that the outbreak of distemper does not spread to other animals in the City, including pets,” said Fletcher’s letter.

She asked for a response from city officials to her letter by Nov. 10.