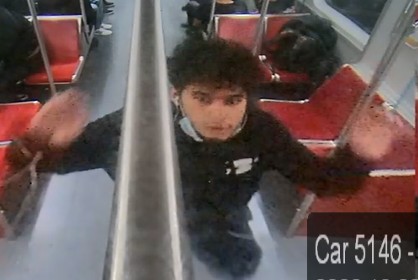 Toronto police are looking for the public's help in identifying a man wanted in connection with an alleged sexual assault on a subway train on Saturday, Oct. 22.

Toronto police are asking for the public’s help in locating a suspect wanted in connection with an alleged sexual assault that took place on a TTC subway train between Woodbine and Jane stations in late October.

According to police, a woman was on a train on Saturday, Oct. 22, when a man sat beside her and allegedly sexually assaulted her. The man is described as 18 to 20 years old, five-feet, seven-inches or five-feet, eight-inches tall, weighing 145 to 160 pounds. He was wearing a black baseball cap with a Blue Jays logo, black jacket, black sweater, black pants, grey and white shoes, and a brown camouflage Reebok backpack.

Images of the suspect have been released by police in the hope that someone may be able to help identify him.