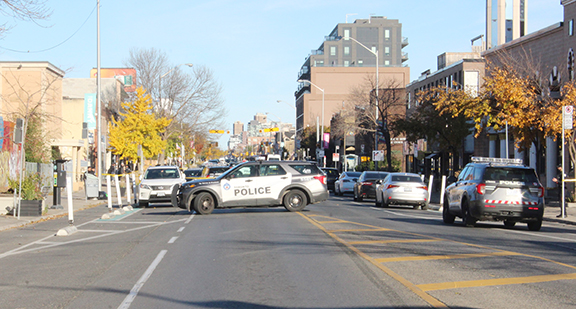 Toronto police have closed Danforth Avenue between Donlands and Greenwood avenue after a man was shot and killed in the area at approximately 3:15 p.m. on Friday, Oct. 28.

Toronto police are investigating after a man was shot and killed in the area of Danforth and Donlands avenues on the afternoon of Friday, Oct. 28.

Police were called to a building near the northwest corner of Caithness and Danforth avenues, just east of Donlands, at approximately 3:15 p.m.

When officers arrived a man suffering from gunshot wounds was found. He was pronounced dead and the incident is now under investigation by the homicide squad.

A resident in the area said she heard “five shots” but did not reveal any other information and then went inside a building that was behind police tape.

Schools in the area, including Wilkinson Public School, were briefly locked down but that was lifted at about 4 p.m.

Police said they are still looking for a suspect who fled the area, but no other information was available at this time.

Police have closed Danforth Avenue between Donlands and Greenwood Avenue for their investigation.