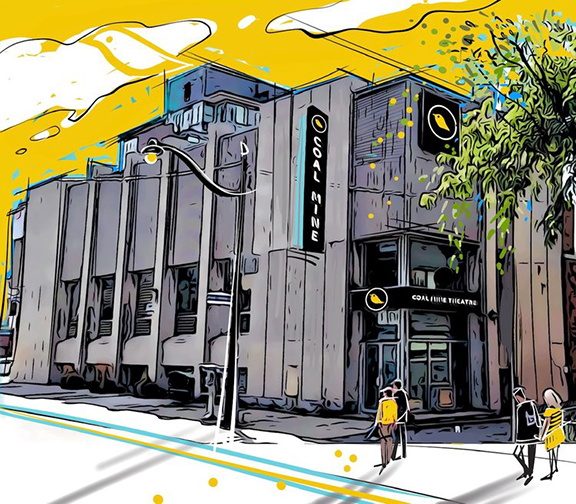 Coal Mine Theatre has announced their relocation to the northwest corner of Woodbine and Danforth avenues after a fire damaged the old theatre’s lobby and front facade in September.

The owners, Diana Bentley and Ted Dykstra, initially launched fundraising efforts to help restore the original building at 1454 Danforth Ave., just west of Coxwelll Avenue. However, that restoration project was deemed as too costly.

“The damage caused to our beloved theatre was, sadly, far too extensive for us to continue with our current Season 8 programming as planned,” read a statement on Coal Mine’s website.

Bentley and Dykstra decided that a better solution was to find a new location to continue the theatre’s eighth season. They found a new home for their line-up of programming at 2076 Danforth Ave.

The original location was well known for the intimacy felt by viewers during performances due to the cozy nature of the 80-seat venue. Although the new venue is slightly bigger, boasting a 120-person capacity, Coal Mine has assured patrons that they have maintained “the up-close-and-personal performance intimacy that has become the Coal Mine’s hallmark”.

Guests will, however, now enjoy a more spacious and relaxed seating configuration, said the theatre’s website.

In September, Coal Mine launched a fundraiser for restoration costs. At the time of Beach Metro Community News’ initial story ( https://beachmetro.com/2022/09/16/fundraising-underway-after-fire-damages-coal-mine-theatre-on-danforth-avenue/ ) they had generated more than $8,000 thanks to the generosity of community members.

Since the decision to relocate, Coal Mine has launched another fundraiser, The Firewall Fund, to help cover the new costs.

The damage to the former theatre’s site was at first reported to be mainly in the theatre’s lobby and front facade, but according to Coal Mine’s website there had been irreparable damage done to the entire theatre which caused the need for relocation. The new fundraiser’s goal is $300,000. These funds will be used to help launch a brand new experience for theatre patrons at the new location.

So far, Coal Mine has reached the halfway mark in their journey towards this goal. Coal Mine said that these funds are needed by Nov. 15. For more info on The Firewall Fund, please go to https://www.coalminetheatre.com/donate

Although Bentley and Dykstra were hoping to resume performances this November, the pivot in plans has forced them to postpone shows until February 2023.

The Effect, written by Lucy Prebble, was supposed to mark the theatre’s re-opening but the show now been moved to the end of the season – July 2023. Other shows this season are Yerma by Simon Stone (Feb. 5 – Feb. 28) and The Sound Inside by Adam Rapp (May 7 – May 28). This season’s first scheduled show, Prophecy Fog, remains cancelled.

For more information on tickets and the 2023 season at Coal Mine Theatre, please go to https://www.coalminetheatre.com/home1