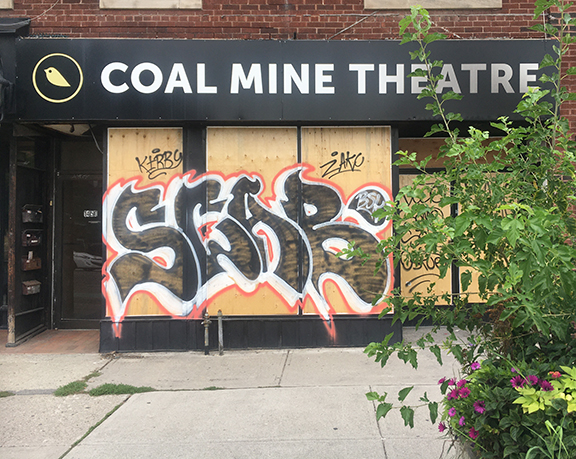 A fire on Sept. 2 damaged the Coal Mine Theatre on Danforth Avenue. Fundraising is now underway to help the theatre owners reopen. Photo by Amarachi Amadike.

Repairs at the Coal Mine Theatre on Danforth Avenue. are still underway after a fire damaged its lobby and front facade earlier this month.

With only 80 seats for the audience, the theatre at 1454 Danforth Ave., just west of Coxwell Avenue, had become known for its intimate performances of award-winning scripts. However, when the last play, Detroit, ended with a performative fire, owners Diana Bentley and Ted Dykstra couldn’t possibly have anticipated that it foreshadowed a real fire in the theatre’s future.

The fire which happened on the morning of Sept. 2 has impacted the theatre’s eighth season which was scheduled to begin on Sept. 25. Bentley and Dykstra were forced to postpone a highly anticipated performance of Prophecy Fog.

“It is with great sadness that we must announce the cancellation of the much anticipated production of Jani Lauzon’s acclaimed Prophecy Fog,” said a statement on Coal Mine’s official website.

“However, after conversations with the Prophecy Fog team, the Coal Mine and Paper Canoe Projects have decided to move the run of the show into the 23.24 Coal Mine season.”

There is currently a fundraiser set up with Canada Helps to help raise funds for the theatre. Although it’s difficult to gauge how much renovations will cost, the fundraiser has so far generated more than $8,000.

Prophecy Fog was cancelled this season, but other shows remain on the schedule. These are The Effect by Lucy Prebble, Yerma by Simon Stone, and The Sound Inside by Adam Rapp which concludes the season on May 28, 2023.

The box office is currently closed but ticket sales for the repriced three-show season will be available when it reopens on Sept. 30.

The Coal Mine Theatre owners are hoping to resume performances on Nov. 20.

Ticket holders will be contacted if there are further changes to Coal Mine’s season eight schedule.