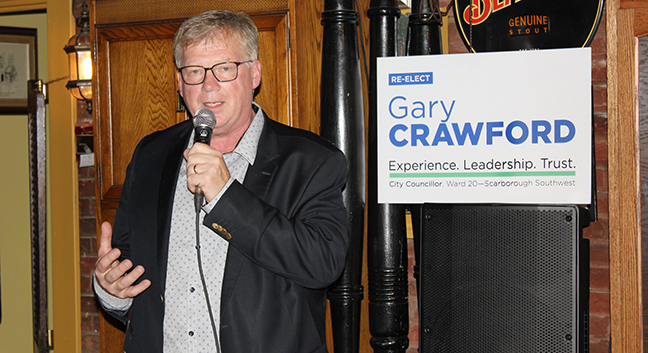 Ward 20 Scarborough Southwest incumbent Gary Crawford has won another competitive race as he holds onto his Toronto council seat for a fourth term.

Days before the civic election, a Forum Research poll had put Crawford in a dead heat with candidate Parthi Kandavel, a local Toronto District School Board trustee and Grade 6 teacher. But, with 55 of 61 polls reporting on election night, Crawford had secured victory over Kandavel by earning at least 35 per cent of the vote with 8,165 ballots cast in his favour. Second place Parthi had garnered 6,933 votes, or 29.8 per cent of the vote.

“I’m very pleased to be continuing in my role as councillor for Scarborough Southwest, and I want to thank the residents of this community for the faith and trust that they’ve given me to continue doing the good work that I’ve been doing,” Crawford told Beach Metro Community News just after 9:30 p.m. on election night outside of the Tara Inn, a Kingston Road pub where his supporters were gathered to celebrate.

No stranger to stumping, Crawford, also a former TDSB trustee, says every campaign has challenges and this one was no exception.

“You just work hard, you listen to people, you react to everything they say — and do what you need to do to win,” says Crawford, who had been endorsed by Mayor John Tory, who held on for a third term Monday night.

Crawford credits his team and volunteers, who were pounding the pavement right into election day, for his victory: “I think it was that work — it’s the one vote at the time, getting people out to the vote.”

Asked what his top priority will be at city hall, Crawford suggests he hopes to continue his work as chair of Toronto’s budget committee. “The big priority, of course — if I come back in my role as budget chair — is to look at the finances of the city and to move the city forward,” he said. A little later on election night, Kandavel described his feelings following what turned out to be an unsuccessful bid for a council seat. “I’m proud of our team, I’m proud of our community, I’m proud of what we were able to accomplish ethically [and] above board,” he told Beach Metro Community News from inside the Royal Canadian Legion Branch 13 at 1577 Kingston Rd. as supporters reacted to the results.

“I’m proud of the support I’ve received. I’m not going anywhere, and we’re going to bring the fight back,” he added.

As he gave up a chance at another term as trustee to throw his hat in for a council role, Kandavel said he’s looking forward to some time off with his family during his remaining parental leave before returning to the classroom in January. “The silver lining is that I’m going to spend more time with our nine-month-old.

Kevin Rupasinghe, who was third with support from 13.7 per cent of ward’s electorate, also praised those who worked on his campaign.

“I’m super proud of my team, and I’m really grateful for all the support we’ve got,” Rupasinghe told Beach Metro Community News in a telephone interview.

He said he wasn’t surprised by the results, which saw him garner 3,198 votes across 55 of 61 polls. “The historical advantage that incumbents have is enormous, and it’s been shown time and time again,” added Rupasinghe, who has worked as an engineer as well as in the non-profit sector.
With election hopes dashed, he plans to continue his advocacy work — starting tomorrow.

“The real work happens between elections,” he said. “Whether it’s road safety, whether it’s housing affordability, the transit in Scarborough, the climate crisis: none of these can wait four years, and I’m not going to wait around till the next election,” said the former campaigns manager for Cycle Toronto, adding, “my M.O. has always been to advocate and to organize.”
Lorenzo Berardinetti, who rounded out the top four candidates with 2,755 ballots in his favour for an 11.8 per cent share of the vote with 55 polls reporting, is weighing his next move as he deals with the shock of a campaign that he thought would fare much better.

“I was quite surprised. It did not reflect the reaction I was getting at the door,” he said in a call with Beach Metro Community News. “A lot of people were saying to me that they were going to vote for me,” he added, congratulating Crawford on his win.

The lawyer by trade, who has served on Toronto council and is also a past member of provincial parliament for Scarborough Southwest, said that he doesn’t have any regrets about running, nor is he ruling out a future attempt at public office. “Anything’s possible.”