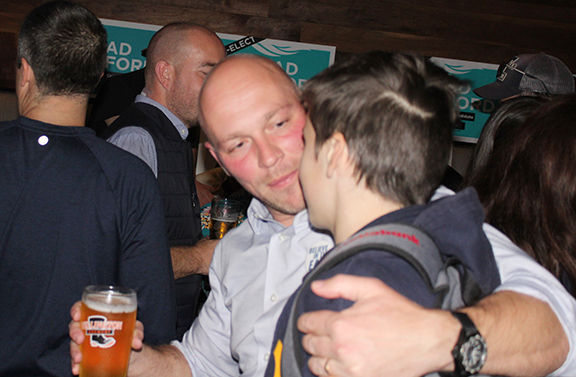 Brad Bradford celebrates his re-election as councillor for Beaches-East York on Monday night with supporters at Local 1794 on Danforth Avenue. Photo by Amarachi Amadike.

On Monday evening, as Carmelo Lorefice roasted chestnuts outside his restaurant, Trecce, Brad Bradford and his team were next door awaiting the results for this year’s municipal elections.

It appears other Beaches-East York residents shared the same sentiment because at around 9 p.m. on Oct. 24, they elected Bradford as Ward 19’s councillor for yet another term.

A former urban planner prior to first being elected ward councillor in 2018, Bradford celebrated his victory Monday night with supporters at Local 1794 on Danforth Avenue.

Bradford topped a field of six challengers to retain the seat he first won in what was a very close 2018 race.

“We started the journey four years ago,” said Bradford. “It’s been four years of working with the community, trying to build a better Beaches-East York. We ran a grassroot campaign and spent the past five months knocking on doors, listening to residents. To see it culminate tonight in a big win is a confirmation of the work that we’ve been doing together as a community.”

During his campaign, Bradford continually emphasized the need for more affordable housing. He told Beach Metro Community News that the food insecurity Toronto is experiencing runs parallel with the city’s need to tackle the housing crisis.

Considering his background as an urban planner, many saw him as the right candidate for Beaches-East York.

“It’s overwhelming to be surrounded by friends and family and supporters – people who believe in us and what we’re doing,” said Bradford. “It’s heartwarming and I will forever be grateful.”

Worden finished second place in the race with 23 per cent of the votes.

Bradford first won his seat after an amalgamation of what used to be the two wards of Beaches-East York (Ward 31 and Ward 32). The seat was vacant as Ward 32’s Mary-Margaret McMahon and Ward 31’s Janet Davis did not run. He ran against 15 other candidates, winning by only 288 votes.

In this year’s election, Bradford secured 54 per cent of the votes marking a much more comfortable campaign than the previous one.

As he continues in his political journey with his new term beginning on Nov. 15, Bradford said his focus remains the same.

“Certainly we have some challenges in front of us. Principally the housing crisis, taking action on climate change, but also getting the little things right,” said Bradford.

He mentioned the need to clean up parks and improve traffic conditions to make sure people can efficiently travel around the city.

It will be interesting to see how Bradford’s second term unfolds. Starting in the next term, the Strong Mayor Act will be implemented. The “strong mayor” will have the power to veto bylaws unless two-thirds of city council opposes the decision, in which case they can override the mayor’s decision. Many have criticized this with claims that it will only take away councillors’ abilities to perform their job effectively.

However, Bradford said he takes no issue with it.

“I don’t really see it that way,” said Bradford. “I’ve always been a very collaborative person who is willing to sit down with folks who are interested in moving things forward. That certainly includes the mayor and my 24 other council colleagues.”
He believes that nothing changes because “progress is made when all levels of government and colleagues around the council chamber work together.”

Before returning to celebrations with his friends, family, supporters who came out to congratulate him, Bradford addressed voters who were at home on the night.

“My sincere and heartfelt thanks to residents of Beaches-East-York for placing their trust in me for another four years,” he said. “I don’t always get it perfect, but I’ll always try my best and I’m looking forward to working with [the community] moving forward.”