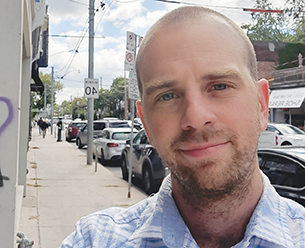 Corey David is running for Councillor in Ward 20 Scarborough Southwest in the Oct. 24 municipal election.

I’m 33 and have spent 25 of those years in Scarborough Southwest. I’ve worked as a Machinist for the last seven years, before that I worked six years for Community Living Toronto and the Toronto District School Board supporting individuals with intellectual disabilities.

I volunteered on three of the four last NDP bids for office and am the secretary for our Electoral District Association. I am a member of Socialist Action where I help organize civil actions and political education. I was on the picket lines when postal workers got forced back to work, when Tropicana Community Centre workers in Scarborough were being mistreated. I went to “1492 land back lane” to stand with Indigenous people when they stood up for their rights. I’ve stood with Palestinians when they protested Canada’s complicity in the ethnic cleansing of their home land. I tried to organize a campaign to save the quarry habitat at Gerrard and Victoria Park. I’ve stood with houseless people and allies when the City sent the police to attack encampments, where I was beaten and arrested.

Social housing driving the profit sector out of this city, no one should be benefitting from people living in desperation;

Abolishing the carceral system that abuses and attacks minorities, the poor and the working class. I will not support any funding to the police;

Protecting the habitats and green spaces of the city that are essential to our health and add to our quality of life;

To commit to serious investment in public services and infrastructure to foster an inclusive, healthy and prosperous city.

It won’t be easy but working people make this city run, we should be the ones making the decisions and together we can, for Scarborough Southwest and for Toronto.

EDITOR’S NOTE: Beach Metro Community News asked the local municipal election candidates that we could find contact information for to send us in profiles of themselves and why they are running for office. We present this information to help voters make an informed decision. Please note that among the eight Council candidates in Ward 20 Scarborough Southwest, we received the profiles and information sent to us from Gary Crawford, Corey David, Parthi Kandavel, Philip Mills and Kevin Rupasinghe. Also running for Councillor in Ward 20 are Malik Ahmad, Sharif Ahmed and Lorenzo Berardinetti.