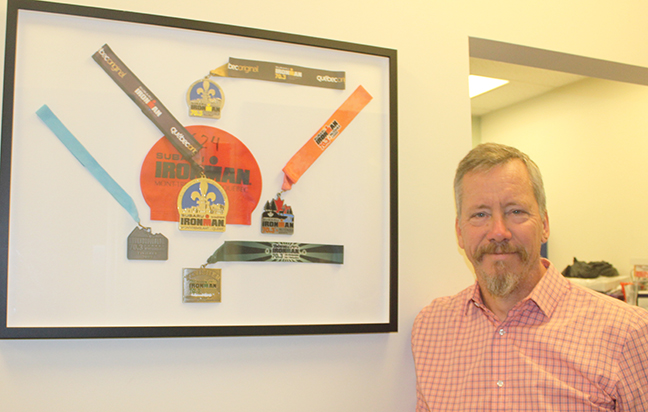 Dr. Robert Donald Pepper Jones, owner of the Main Street Veterinary Clinic, recently made a contribution of $30,000 in support of Beach Metro Community News. Above photo he is shown at the clinic with some of his Ironman competition awards. The exterior of the clinic (inset photo) has been colourfully painted to be reminiscent of shop fronts in St. John’s, Newfoundland. Photos by Alan Shackleton.

Dr. Robert Donald Pepper Jones, owner of the Main Street Veterinary Clinic in East Toronto, believes in the importance of helping the community.

A Beaches resident for almost 30 years, Jones said Beach Metro Community News is one of the newspapers he always reads.
“It’s important to have a local newspaper and I do enjoy reading it,” he said.

Dr. Jones said he hopes his donation of $30,000 inspires other business owners in the community to also consider becoming Beach Metro Community News Supporters with their own generous contributions.

“It’s an important part of the community,” he said of the paper.

Born in Newfoundland, Dr. Jones graduated from the Atlantic Veterinary College at the University of Prince Edward Island in 1992. Following graduation, he worked a solo practice in Wallaceburg, Ont., before moving to Toronto.

He became a partner at the Birchmount Veterinary Clinic in Scarborough in 1995, then the Medical Director and Corporate Partner with AVC Canada (later Veterinary Clinics of America) in 2008. Dr. Jones started the Main Street Veterinary Clinic as a solo practice in 2013, opening in March of 2014 at the northwest corner of Main Street and Gerrard Street East. He opened the clinic with an emphasis on work-life balance and quality, affordable medicine.

In response to the more than 100 hours a week he found himself working, the clinic has now expanded to four veterinarians and growing. Also at the clinic is pet weight-loss expert Stacey Kew who helps clients with overweight pets achieve their ideal weight through education and support.

Dr. Jones said he is now semi-retired and “loving it.”

Along with his work as a veterinarian, Dr. Jones also takes part in Ironman competitions, practices martial arts and enjoys riding his motorcycles. Also, he and his dog Fergus were a St. John Ambulance Therapy Dog Team five years before COVID hit and Ronan, his nephew, is following in Fergus’ pawprints in November. Dr. Jones is also a St. John Ambulance Therapy Dog Evaluator in training which COVID interrupted as well.

For more information on the Main Street Veterinary Clinic, please go to the website at https://www.mainstvc.ca/

For more information on becoming a Supporter of Beach Metro Community News, please go to https://beachmetro.com/donations/support-beach-metro-news/