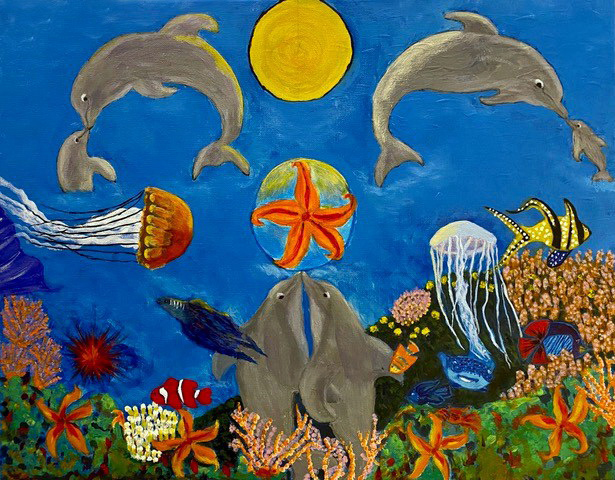 Works by artists Marcella Spinace, (image above), Shelley Cinnamon and Nina Hod (inset images) will be among those featured at the Beach Guild of Fine Art Fall Show. The in-person show takes place Sept. 30 to Oct. 2 at Beach United Church.

Members of the Beach Guild of Fine Art are pleased to host their first in-person show in three years at Beach United Church starting on the evening of Friday, Sept. 30 and continuing through that weekend.

The Beach Guild of Fine Art was founded in 1994 by a small group of local artists who all lived in the “Beach” neighbourhood of the city.

The Guild’s mandate is to support each other as artists and to promote and encourage the appreciation of art in the community.

Membership has grown over the years to 60 members and they are one of the few groups who offer large Gallery Shows as well as smaller Boutique size Art at the same time.

Artists taking part in the show will include Shelley Cinnamon, Nina Hod and Marcella Spinace.

Cinnamon has lived and worked in Toronto for more than 40 years. Her painting became her main focus after her career as a graphic design and art director.

Her interest in art started at a very young age and by ten she was already painting in oils. She has traveled extensively around the world for both pleasure and work.

The love of painting and artwork was really fostered as she visited the great galleries of Europe and explored the arts in Africa and Asia.

In the last 15 years Cinnamon has delved more intently into developing her own style and voice in her painting and artwork. She has had her own single woman art shows as well as been involved in numerous group shows.

A couple of the highlights in her career were the McMichael Collection Volunteer Art Show and the Artists Project. Cinnamon has been a member of the Beach Guild of Fine Art for more than 15 years. She now works predominantly in acrylics with the occasional foray into oils. Light, water and atmosphere are three of the elements she likes to focus on.

Hod has been a member of the Beach Guild of Fine Art for nine years and is a is a self-taught artist.

Her artistic style is influenced by The Group of Seven and Inuit art. She enjoys painting various subjects, whatever stirs her interest at any given moment.

Hod also likes painting facial expressions and emotions. Her artwork is rich in colour and texture. She is using her own unique technique which is quite challenging. The results are often surprising and intriguing. The achieved shapes and textures are different in every piece.

Hod enjoys spending time at the beach collecting pebbles, pieces of glass and wood. She is using these gifts of nature for her mixed media artwork: images of Inuksuk and trees on the beach.

Born in Argentina from northern Italian blood, Spinace immigrated to Canada in 1972. At an early age she was exposed to art by her father, a fine cabinet maker and self- taught artist.

Her love of nature and animals and her sensitivity for art drew her to explore her capabilities of painting.

Spinace began with oil painting. For the last seven years she has been involved in acrylic painting classes with a local artist. She loves to work with vivid colours creating a variety of expressions, usually on larger canvases.

Along with the in-person exhibition, the Beach Guild of Fine Art is also holding an online version of its Fall Show that can be viewed at https://beachartguildshowandsale.ca from Sept. 30 to Oct. 9.