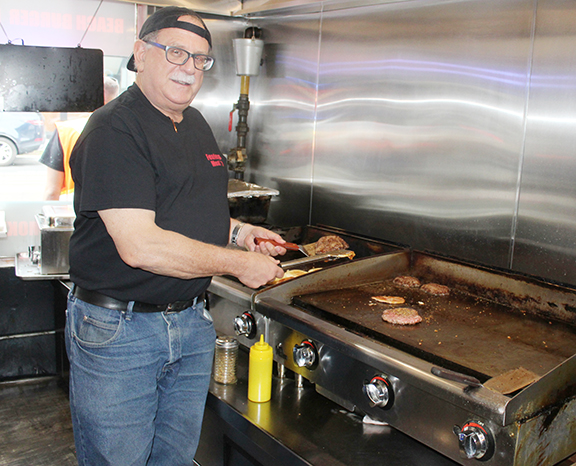 David Brown, shown at the grill in Fearless Meat on Kingston Road, has been named the Beach Citizen of the Year for 2022. Photo: Alan Shackleton.

The Beach Citizen of the Year for 2022 is David Brown, owner of Fearless Meat on Kingston Road.

A ceremony to present him with this honour will take place on Saturday, Oct. 1, at the Millennium Garden in Woodbine Park starting at 12:45 p.m.

Brown opened the Fearless Meat restaurant in early 2018 and quickly became involved in supporting numerous community causes and local businesses. He has held fundraisers for a number of local businesses, organizations and initiatives over the years including Variety Village and Beach Metro Community News.

“I’m deeply honoured and will do a good job to be an ambassador for the community going forward,” he said of being named Beach Citizen of the Year for 2022.

“I help out with a lot of things because I know what that situation is like when you don’t have much money from when I was a kid,” he said.

Along with his support of local charities and causes, Brown is also known for giving out free food items to children, veterans and their families, and those who are in need.

“I remember that ice cream was something we could not afford, so now every kid can come here and get an ice cream,” he said. “The reality is that even now it’s not possible that every family can afford ice cream cones for their kids.”

A butcher for close to 50 years, Brown said his is a profession with a long tradition of helping those in need. “I have been a butcher for 50 years and this is a tradition I have always taken very seriously.”

A trade that goes back hundreds of years, the tradition of helping others goes back to the close relationships butchers would have with the farmers and residents of the towns and villages they served.

The slogan of Fearless Meat is ‘tender as a butcher’s heart” and it’s a philosophy Brown puts into action.

Originally from Kincardine on Lake Huron, Brown has been a Beach resident since the early 1980s. He has been a member of the International Association of Culinary Professionals (IACP) since 1988, and culinary icon Julia Child called him “The Butcher of Canada” after he cooked for her and 200 of her friends in Rhode Island.

Helping others has always been part of what Brown does. “Fearless Meat is going to support and be a leader in the community,” he said.

“I feel it is important to do the right thing and to step up to help people. I lead by example and hope that will inspire other business people who are able to help out others when they can.”

Brown’s leadership was especially felt in the early days of COVID-19 when the virus was first starting to make news. The owner of a Kingston Road flower shop was subjected to a racist tirade linking COVID to China. Brown stepped in to offer his support to the owners of the Flower Centre, Andy Sue and Wing Ye, after the incident by encouraging others to shop at the store and condemning the racism on behalf of all other local business owners.

Brown also shows his support for local veterans in a number of ways including fundraising, Remembrance Day events and free food.

“It’s important to step in and help people like seniors and those facing issues. Veterans as well. They are a group that has been highly under appreciated. It’s important to do what we can to support them,” he said.

Along with involving Fearless Meat in the fundraisers, Brown is also personally helping to create supportive and affordable housing units in Toronto. He has done the same in the Bruce County, where his hometown of Kincardine is located.

In 2015, Brown bought two houses in the Cabbagetown area of Toronto and then helped transform them into transitional housing units in partnership with First Nations representatives, the Ontario Ministry of Health, Good Shepherd Non-Profit Housing, and the Toronto Community Health Centre.

He is now involved in a similar project with the Fred Victor Centre for the building located on the west side of Fearless Meat. Brown plans to expand the size of the restaurant and also create a six-storey mixed-use building providing self-contained supportive housing units.

“I am going through the process with the city for the building next door and will be expanding the restaurant and also have affordable housing apartments taken by the Fred Victor who will administer the apartments and provide 24-7 supports and individual case management for the tenants,” said Brown.

He said he will also be offering jobs at Fearless Meat to some of the residents living in the units once they are built.

“That’s where we’ll be helping to build self confidence and job skills so they can leave the shelter system,” said Brown.

“I think it will be a very positive thing in the community. I hope there is positive feedback but I am prepared to sit down with people who have concerns.”

He said business owners and landlords stepping up to do the right thing for those in need is a critically important during the current housing and economic crisis many are facing in Toronto.

“This is not a Band-Aid solution. This is a permanent solution that can be copied in other parts of Toronto and across Canada,” said Brown.

A supporter of the community, Brown also wanted to thank local residents for their support of his business. Hw said he has been very fortunate to have been so strongly supported and embraced by the Beach community since he opened Fearless Meat.

“I love this area and I’m proud of the people who are so selfless as they help others and this is a reflection of the community’s strength.”

The Beach Citizen of the Year has been awarded since 2001. It is presented to someone who has worked hard over a period of time to improve life in the community, has had an impact on a broad spectrum of community members, has made a tangible contribution over a long period of time and has inspired others to participate more in community life.

For more information, including a list of past winners, please go to https://beachcitizenaward.org