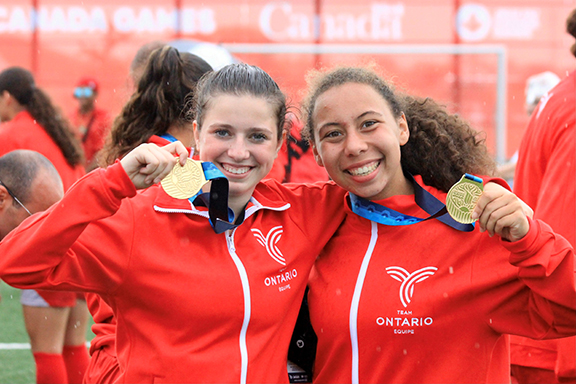 They were also both recently selected to the Canadian team competing in the Under-17 Revelations Cup in Mexico.

The tourney in Leon, Mexico took place from Aug. 31 to Sept. 6 and is considered preparation for the Under-17 Women’s World Cup which will be played in India this October.

At the Canada Summer Games in Niagara Falls last month, Team Ontario went undefeated through all its games and did not allow a goal against on the way to winning the gold medal.

Briggs played her minor soccer with the Leaside Soccer Club and Watson played with the East York Soccer Club.

At the Revelations Cup in Mexico, the Canadian team had a record of one win and two losses in the four-team tourney.

Canada opened the tourney on Aug. 31 with a 1-0 loss to Colombia and then fell 4-1 to Mexico on Sept. 3. In the game against Mexico, Watson scored Canada’s lone goal. In their final game of the tourney, Canada beat Chile 3-2.

Both Briggs and Watson are hoping their experience at the Revelations Cup will earn them a spot on the final roster of the Canadian team selected to play in the Under-17 Women’s World Cup tournament. Taking place in India, that tournament goes from Oct. 11 to 30.

The roster for the Canadian Under-17 Women’s Team competing at the World Cup in India has yet to be announced.