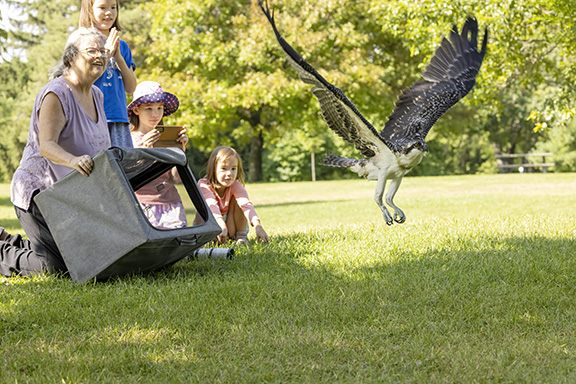 Photo above by Terri Martin shows Ann Brokelman and her granddaughters Lara, Cara, and Diana releasing an osprey back into wild earlier this summer. Inset photo shows the doe and three fawns which Brokelman had earlier encountered in Scarborough.

Oh, what a summer it has been! I’ve had a lot of amazing sightings and wildlife encounters over the last few months, and today I wanted to share my top three moments:

Some of you may have read my previous article about the birth of fawn triplets in my neighbours’ backyard, back on May 21, 2022. Now, even after a few months have gone by, I’m still in awe over that experience.

While I hoped to see the whole family again one day, in the back of my mind I always knew that it was against the odds for all three fawns to survive; in a world full of cars, fences, predators and more, it’s hard enough for a single fawn to make it.

I also knew that I’d probably never find out what happened to them, as the mother would likely move them out of the neighbourhood.

Skip ahead to July 30, and I had pretty much given up hope of seeing the family again when Erle came in from walking the dog and told me the triplets were right next door!

I flew out of bed, (yes I was sleeping in, again), called my neighbour Cathy to hurry over, and the two of us quietly watched out the backyard. Sure enough, we had a magnificent view from under the treehouse.

We sat and watched for 15 minutes as the fawns were literally frolicking about. The two larger ones would zoom around the edges of the neighbour’s yard, jump over his garbage cans, disappear around the side of the house, and then come flying back, side by side, to their mom. The smallest fawn stayed close to its mom, content to watch, until the mom seemed to want to join the festivities and left it behind to chase the others around the yard.

Cathy and I realized that the doe might be trying to get the fawns to settle, so we decided to retreat to the house and give them their space.

Sure enough, a few moments after we went inside, the three fawns settled down along the fence. The doe jumped into our yard and laid down at the back in the shade.

Even with the fawns being so much larger, the mom will, for a while yet, stay at a distance to keep them safe. Remember: if you find a fawn by itself, it’s very unlikely that it’s been abandoned. It’s much easier for the fawns to hide than it is for the mom, so she’ll leave the fawns alone, in a good hiding spot, for hours at a time.

The second highlight was releasing an osprey with my son Erik and my three granddaughters Lara, Cara, and Diana. Two other friends also joined us Paul and Terri.

Shades of Hope Wildlife Refuge asked if I could release a younger osprey last week for them, and Erik and the girls were conveniently free to join me.

When I arrived at our chosen location, I saw six ospreys, already in the sky, calling and circling the water looking for fish. This was ideal. There was no way to know the outcome but having other adults around to watch and learn from would be the best-case scenario. Osprey are usually only territorial around their own nests, so it was unlikely the other birds in the area would try to chase the new one away.

When Erik arrived with the kids, we found a perfect location with water not far away.

Erik filmed while the girls and I opened the crate. We all had a laugh as, when the crate first opened, the Osprey quickly shot one, and only one, of its wings outside. Slowly he brought his head out, then the other wing, and then a few tentative flaps that seemed like more stretches.

He ended up walking out of the crate, turned around to shoot me a dirty look, and then took off. He quickly flew between some trees, on his way to the lake, before he disappeared from our sight. What a great experience for the girls!

The third highlight has been realizing that life is really getting back to normal.

I know COVID isn’t over, and I’m going to keep wearing my mask when I go get my groceries (flu season isn’t that far away), but that doesn’t mean I can’t appreciate the joy of walking, mask free, through the local parks, with a friend, and watching the monarch butterflies start their migration to Mexico.

The simple joys have started to return to our city.

Great article, Anne! Yes, the simple joys are slowly returning.
What a thrill for the children to see this osprey release – something they will treasure for years!
Thank you for sharing this.