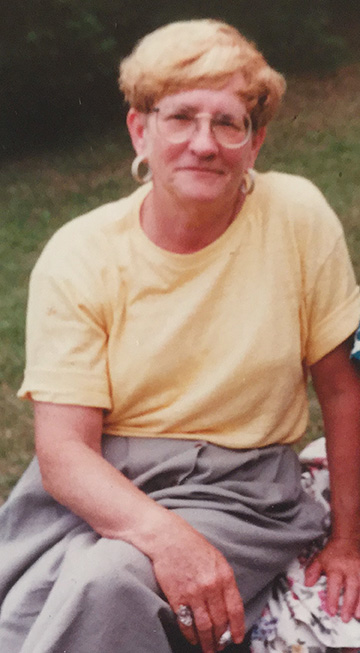 Lenore Diaz, who died earlier this month, is remembered by her friend Sheila Blinoff.

Cruising down the highway.  On the roof of the VW camper was a kitchen table with its wooden legs in the air. We had no rope to tie it down,  so we used old pantyhose. The final pair, which we stretched from toe to toe until it did the splits, was purple. As we stopped at a traffic light, a truck pulled into the next lane. The driver honked, opened his window, and shouted, ”I  want to meet the woman that wore those tights.”

That was Lenore Diaz, my friend for over 40 years. She died in August.

Born in 1935, she grew up in the Queen and Sherborne area, and moved to Scarborough Road in the late 1960s with her husband and four young children. Here she befriended a neighbour, Betty Stephen. With 11 children between them, the two mothers lamented the lack of recreation facilities in the area.

(This was 1970. There were no Beaches, Adam Beck or Balmy Beach recreation centres; and no Community Centre 55.  Ted Reeve Arena had opened in 1954, but not every child or teen wanted to play hockey or could afford to.)

The East City YMCA, opened in the early 1950s, was now closed. The two women persuaded the Y to allow them to re-open the building as a youth drop-in centre, and keep the Y presence alive at 907 Kingston Rd. The Y would pay for the utilities, and the women would donate their services and recruit other adults to help.

They allowed neighbourhood groups to hold their meetings and plan their strategies in the building. These included ForWard 9 ( which spearheaded the fight against the Scarborough Expressway,  etc.), The Friends of the Leslie Street Spit, and the Woodbine Community Association that secured an old police station to become Community Centre 55.

New organizations were given free office space. They were  Ward 9 Community News (the original name  of this paper), and Senior Link (now Neighbourhood Link). The Ward 9 Co-operative Playschool met weekday mornings in the Y gym, and a few years later the Beaches Alternative School began in the large back room.

The legacy of these women is that the groups they helped went on to improve the lives of many in the neighbourhood.

The Y became a hotbed of estrogen. As well as the youth drop in, there was a women’s drop in. This was the era of The Women’s Movement, and Lenore and Betty were keen adherents. In one of the  rooms was a library of feminist books for all to borrow.  A YWCA facilitator was brought in to run Women’s Consciousness Raising sessions.  Classes on carpentry and the repair small appliances were given by women for women. Copies of “Our Bodies Ourselves” were ordered in bulk. Those in crisis came for help and comfort, and at times we had to be quiet as someone was sleeping in the back room.

By the early 1980s the Y had reclaimed the building, and for a short time Lenore was hired as its supervisor. She then worked at a number of positions at the Toronto District School Board.  She was more familiar with using tools than many  women at the time, and became a caretaker at an east end school. Then she worked with a teacher rounding up students with a  poor attendance record and devising  programs to keep them in school. On one occasion they visited an obstacle course and everyone had to finish or the whole team failed, and even she felt challenged by having to crawl though a long tunnel.

Before she retired, she worked at the TDSB with adult immigrants, helping them with English and teaching them facets of Canadian life. Everywhere she worked, she made friends who became part of her circle.

People were drawn to Lenore. Her kitchen and porch on Scarborough Road were a magnet for women. They came by for a coffee and chat, a ride or a request for help. One time her kindness backfired. She had been in hospital and brought home a patient who had nowhere to stay in Toronto. The woman turned out to be argumentative and very demanding, and there was great relief when she left town.

She was a keen supporter of this newspaper, and served as one of its early presidents. She filled in on a maternity leave. She was part of the volunteer team that unloaded papers from the delivery truck and counted and tied them for distribution. She liked to come by with the latest news.

She was a great friend to the editor, Joan Latimer and to me. We spent three or four weekends a year at Joan’s schoolhouse near Arthur putting into practice the skills  we had learned at our handy person night school course. What the pair really enjoyed was scouring the countryside (and the city) looking for garage sales. No matter who was driving, once the van stopped, they jumped out and ran to see who could find the best buys first, and the winner gloated and teased the other.

Once a year we three and up to half a dozen other friends of Lenore took a holiday together. Each year a different woman supplied a cottage. Sometimes we stayed at Lenore’s trailer by the Trent River or slept in tents beside it. Some stayed up most of the night talking by a fire. I tried to teach them Canasta: whenever anyone tried to concentrate on her hand, Lenore began chomping loudly on cinnamon sticks to distract them. After five days we were ready to return home. Later someone anonymously sent me a copy of Hoyle’s Rules for Christmas.

One Saturday evening almost 30 years ago two police officers came to my door to take me to East General Hospital, where I learned that my husband, who had gone for a walk on Queen Street, had suddenly died. I was asked to call a friend. I gave Lenore’s phone number, as I knew she would come right away.

After the formalities, she drove me home, made a pot of tea and said, ”We are going to make a list of all the things we have to  do in the next few days.” Next morning she was back with a group of mutual friends ready to clean my house (a renovation was underway), while she and Joan Latimer went to a funeral parlour with me. On the day of the funeral in her haste to get a good parking spot, she hit my in-laws’ van  in the cemetery.

Life was not always kind to Lenore. In a short time she lost her mother, husband and older son. She came to dislike being home alone in the evening. She could often be found at the Fox Theatre with Kleenex stuffed in her ears as she felt the sound was too loud.

In her eighties her health failed, and she no longer knew us. She spent her final years in a nursing home.

She had influenced many lives for the better, including mine.

Beautifully written, she was an awesome person that influenced my life greatly. R I P. you will be missed greatly!

She was Quite something seena. And pattis right very nicely written.