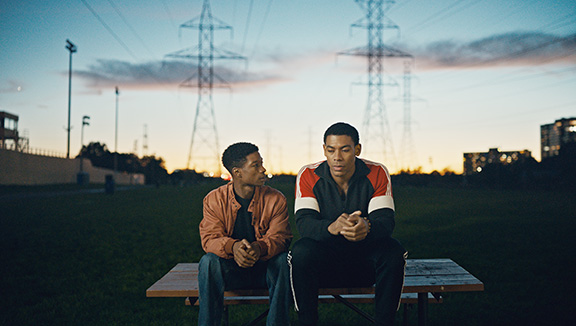 Brother, directed by Clement Virgo, is based on the book by David Chariandy and takes place in Scarborough. Photo: Guy Godfree

Have you ever read a good novel and wondered how it would be adapted to the screen? What would the characters look like? How would the director deal with flashbacks?

Both stories are set in the past, but could be ripped from today’s headlines about sexual assault, gun violence and the policing of marginalized communities. How do we see the lives behind the news reports?

Brother is a Toronto Book Award-winning 2017 novel by David Chariandy about two sons of Caribbean immigrants living in a housing project near the Rouge Valley in 1991. The author was born and raised in Scarborough.

Clement Virgo has written and directed the screen adaptation. He feels a deep personal connection to these characters as the son of Jamaican immigrants, growing up in Regent Park and attending Danforth Collegiate.

Scarborough highrises aren’t far from the Beach, but the coming of age experiences there may be a world apart.

Scenes were filmed all around the east end, including a convenience store on Barrington Avenue near Main Street where tragic events are set in motion.

Life can change in an instant. Brother explores family relations as the resilience of a community is tested in the wake of violence and escalating tensions…

“You could feel it more than ever. You caught in the eyes of strangers the suspicion or outright fear. You sensed the halo of menace above your head, glimpsed the turbulence swirling behind as you walked. On TV and in the papers, politicians promised to crack down on criminals, with echoed agreements from suited community spokesmen.”

Sarah Polley has adapted Miriam Toews 2018 novel Women Talking about female empowerment in the aftermath of sexual assaults in a remote Mennonite colony in Bolivia where women were treated as property.

The story is inspired by real-life events. What do people do after the unspeakable has happened?

Books and films help us to see the world through different eyes.

In the light of recent United States court decisions, Women Talking will certainly stir discussions about women’s rights. I hope to write more about the film after T.I.F.F., which takes place from Sept. 8 to 18.