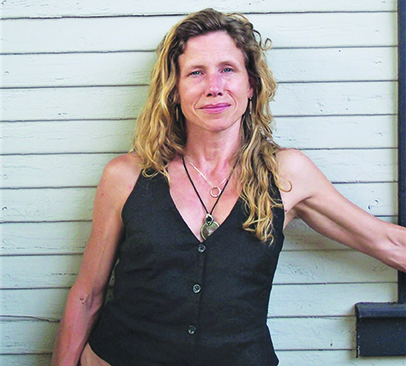 Karen Fullerton-O’Brien, the beloved owner of Courage Foods on Kingston Road, is being remembered by her many friends and customers as a woman who was dedicated to serving the needs of the community.

She died suddenly on July 7 of an aneurysm at the age of 66.

Her death was a shock to all who knew her, and the grief was felt throughout the East Toronto community and beyond.

Her husband and business partner at Courage Foods, Jim O’Brien, said Karen was a person who lived her values in everything she did.

“There was a consistency with her. She was the most genuine person you ever met and I know that to be absolutely true,” said Jim.

“She lived true to her values. She would never backslide ever. I’ve seen her chase people down the street to give them their nickel change. She had that same commitment in how she loved people,” he said.

“There was genius to her. She had an artistic and creative side, and a mathematical and business side together.”

Karen was born in June of 1956 in Chicoutimi Quebec. Living, however, for the first year of her life in Arvida, Quebec.

After the family’s time there, she lived in Switzerland, Chicago and Atlanta, finally settling in Montreal.

Jim went to law school, and he and Karen reconnected after university.

“She was just the most beautiful woman I have ever seen,” he said of Karen.

They lived together for a number of years before getting married prior to the birth of their first son. They have two boys, Jim Jr., 33, and Devin, 30.

They came to Toronto in 1993 and first found a house on Scarborough Road, before buying their current home on Bingham Avenue a year later. They moved to Toronto for Jim’s legal career.

He and Karen were already familiar with the Beach area of Toronto before they moved from Montreal, and always felt it would be a great community in which to raise a family.

“The neighbourhood reminded me of the NDG (Notre Dame-du-Grace) in Montreal. It had different styles of family homes and lots of trees. It felt right to us,” said Jim.

He and Karen loved that the Beach was a real neighbourhood with lots of amenities and supports.

That sense of community support was especially true when Karen decided to open Courage Foods.

While in the Beach, Karen first worked with the Toronto public school board where she helped with art programs at a number of schools including Kew Beach Public School.

In 2005 she started working at Farmer’s Daughter, a grocery and food store at 946 Kingston Rd., and soon became the store’s manager.

“Karen said the community is starving for a place like this, and she said ‘We can do it’ and we did,” said Jim of their decision to open Courage Foods. “We started it.”

They named it Courage Foods after Jim’s relatives of that name in Aberdeen, Scotland who had run a pub with a kitchen and catering services going back to the late 1800s.

“That was the inspiration for the name, along with having the courage to do it,” he said.

Jim said the sudden closing of Farmer’s Daughter left a number of its employees in the lurch, and Karen wanted to make sure they were looked after when Courage Foods was opened.

“She called back all the staff who lost their job when Farmer’s Daughter closed,” he said.

Two of those people called back to work at Courage Foods when it opened in 2010 just recently retired and the other is still working at the shop.

“The response was great when it opened. We have always had loyal customers,” said Jim.

He said Karen was deeply involved in the community far beyond providing the services at Courage Foods.

“She was always heavily community-oriented. She supported conservation efforts like the Glen Stewart Ravine.

During COVID we were delivering to our customers who needed us,” said Jim.

“She treated the people who came here like you would treat a neighbour in the old days who had come over for a cup of sugar.”

Many local residents have expressed their feelings about her on tribute pages and social media when news of Karen’s death became known.

“I remember someone came in after to tell me how Karen had broken apart a celery head and just gave her the three stalks she needed,” said Jim.

Customer Darla Cameron told Beach Metro Community News about how Karen would wrap just enough of the spices or herbs that she would need for a specific recipe in a paper towel for her, rather than making her buy an entire package or bunch of them.

“Courage Foods was always a place people wanted to come to. It was a place to be, not just a store,” said Cameron. “It was like an extension of my home kitchen.”

Among the many online tributes were:

“Her courage and spirit will live on in the community. May we all learn to exemplify her kindness, compassion and strength. She will be greatly missed,” wrote Taina Kanerva.

“Karen was the embodiment of light in its true description, passionate, tireless, caring, driven, always on the go. I will miss her. I will miss her jokes and her laughter, her light figure either on her bike or constantly working behind the scenes in her shop,” wrote David Gray. “She will be forever remembered.”

Jim said Karen’s creativity and passion can be seen in everything that is Courage Foods.

He referenced the hand-written signs that Karen would take great care creating almost every day for the shop. Those signs are still there.

“I can’t get rid of her gorgeous handwriting, and she put the same care and effort into everything she did,” he said.

“Aside from the storekeeper, she was an actress, a dancer, a painter, a teacher; the most loving mother and glorious wife,” said Jim.

He said he wanted to thank everyone who has expressed their condolences, shared memories of Karen and offered support over the past few weeks.

Jim said that a Celebration of Life Ceremony for Karen will take place on Saturday, Aug. 27, at Kingston Road United Church. The ceremony will begin at 2 p.m.

Jim said he has already heard from people who will be coming in from as far away as Vancouver to remember and celebrate Karen’s life.

I remember Karen in the early 80’s, a truly beautiful woman inside and out, she was acting in those days with Robert Parsons, and afriend of Robert and Cathy McKlem, sorry to hear of her sudden death

Karen was an amazing passionate hard working woman , who gave me and my family opportunity when no one else would. I’m truly shocked to have just found out about Karen. She will be deeply missed by all that knew her. Rest in paradise Karen