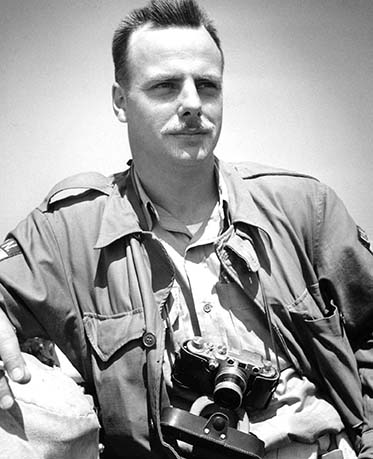 Beacher Jock Carroll photographed both Marilyn Monroe and Elvis Presley when their careers were starting in the 1950s. Inset photo shows the book Falling for Marilyn published after Carroll's death in 1995.

Marilyn… Elvis… we know them by their first names even after all these years. Their legends live on in two new biopics. Elvis is a summer hit while Blonde is a highly anticipated film coming to Netflix in September.

One Beacher knew and liked them both on their brink of stardom.

“Your candle burned out long before your legend ever did.”

It was a tough assignment, but someone had to do it. Jock Carroll had been a war correspondent in Korea, but in June of 1952 Weekend Magazine sent him to Niagara Falls to photograph and interview a rising actress.

Marilyn Monroe was in the Honeymoon Capital for her first starring role in the thriller Niagara.

The movie featured one of the most spectacular natural wonders of the world…and the Falls weren’t bad either.

Photographer, journalist, editor and author Carroll travelled around the world, but always came back to his home on Fallingbrook Road.

His father Frank Carroll was one of Canada’s best-known sports figures, a pro boxer, Olympic coach, trainer on two Stanley Cup-winning Toronto hockey teams (1914 and 1918) and the Toronto NHL head coach with the highest winning percentage ever (1920-21).

Frank Carroll lived on Queen Street East at Beech Avenue, then moved to Lakeview Avenue which was renamed Fallingbrook Road soon after Jock’s birth in 1919.

Jock was a star athlete at Malvern Collegiate and served as a Royal Canadian Air Force pilot in the Second World War. He spent 20 years working for Weekend Magazine.

One month before meeting Marilyn in Niagara Falls, Carroll honeymooned at the very same hotel overlooking the Falls. He was to take photos and interview the 26-year-old starlet for two days, but they got along so well he stayed for two weeks.

Hey, who can blame him? He helped her shop, practice smoking for a role and even drove her across the border to send a sweater to Joe DiMaggio.

“We are all of us stars and we deserve to twinkle.”

Carroll saw the vulnerable person behind the glamour, describing Marilyn as “friendly, charming and always late.”

She opened up about her difficult childhood, her depression, her hopes and her wish to be taken seriously as an actress. She liked to read a lot and was no “dumb blonde”. Marilyn loved the camera and the camera loved her. Carroll took more than 400 photos which were published as Falling for Marilyn after his death in 1995.

Among his nine books was a novel, The Shy Photographer, about a young writer and a Hollywood beauty.

Carroll had a knack for being in the right spot at the right time.

He profiled Elvis in the summer of 1956 when the King of Rock and Roll burst on the television scene. Carroll was there when Hound Dog caused a sensation.
Elvis’s manager, Tom Parker (played by Tom Hanks in the movie Elvis) asked Carroll if he wanted to come on tour with Presley.

Carroll really liked the polite, young singer, but didn’t think that rock n’ roll was here to stay and declined the offer.

That year Carroll interviewed Beacher Glenn Gould on the Boardwalk and spent two weeks in Nassau with the piano prodigy seeing the playful side of the eccentric musical genius.

Carroll also wrote about his neighbour and friend Arthur Hailey just before the huge success of Airport led Hailey to forsake Fallingbrook Road and move to California’s sunny climes.

As a kid I knew Jock Carroll as an avid golfer and bon vivant around Scarborough Golf Club. I’ll bet he had a lot of great stories to tell!