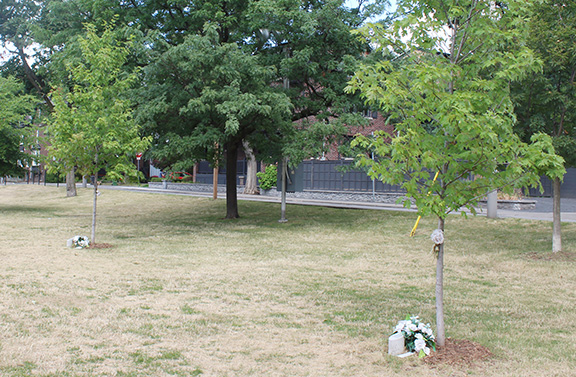 A memorial ceremony is set for this evening at the north end of Withrow Park to mark the fourth anniversary of the Danforth Shooting. The memorial will take place by the two trees planted to remember Reese Fallon, 18, and Julianna Kozis, 10, who were killed in the shooting on July 22, 2018.

The fourth anniversary of the Danforth Shooting is today (Friday, July 22).

The shooting on the night of July 22, 2018 in the Danforth and Logan avenues area took the lives of 18-year-old Malvern Collegiate grad Reese Fallon and 10-year-old Julianna Kozis of Markham. Thirteen other people were wounded in the shooting.

After the shooting, the group Danforth Families for Safe Communities was formed in an effort to strengthen gun control laws in Canada and especially as they relate to handguns.

With the introduction of a new Bill C-21 by the federal government at the end of May, members of the group feel Canada is starting to head in the right direction when it comes to meaningful control of handguns.

“I do think the government listened to a variety of voices, including gun owners (hence a freeze for handguns, not a ban and buy back, and exceptions for Olympic pistol shooters), but yes, I feel like a number of victims and survivors from across the country were given the opportunity for input,” said Ken Price of Danforth Families for Safe Communities. Price’s daughter Samantha was wounded in the Danforth Shooting.

The weapon used in the Danforth Shooting was a handgun that had once been legally owned but was stolen and eventually sold illegally.

Bill C-21 sees restrictions that will make ownership of a handgun more difficult, but it falls short of a complete ban of them in Canada. It does, though, put a federal freeze on the sale, purchase or transfer of handguns for the overwhelming majority of citizens. Only those specially designated, such as police and certain sport pistol shooters, can continue to buy and sell handguns.

An earlier version of the Bill, which would have seen the responsibility for handgun control fall to municipalities, was not well received by gun control advocates including Danforth Families for Safe Communities.

Price said the Bill C-21 introduced on May 30 by Public Safety Minister Marco Mendicino is better and more along the lines of what his group was looking for.

“Eventually we see this as a phasing out of handguns – the format of firearm most frequently used in crimes,” he said. “The prior Bill C21 proposed to deal with this community by community and/or province by province, an approach with which we had strong disagreement.”

However, there are still many concerns surrounding Bill C-21 including the number of handguns in Canada and the movement of them, said Price.

“Existing handgun owners who comply with the law can continue to use and own their existing handguns,” he said. “We are concerned with the risk posed by the million handguns out there, but the number will stop growing, which it has been doing at ~55,000 per year over the past five years. And with it the growth of straw purchasing, diversions, lost weapons, theft, and crime by license holders. And yes, we know that a portion of crime guns are illegally imported, but the domestic supply contributes far too often, as it did in our case.”

Price said there were two items not addressed by Bill C-21 that Danforth Families for Safe Communities would have liked to see included.

“We are concerned that there is no cap on the number of guns an individual can own,” he said. “Also, we hoped that accessories for guns, such as magazines, would need a PAL (possession and acquisition licence) as the guns themselves and ammunition do. In our case, the perpetrator purchased additional magazines with a credit card from a local gun trailer, even though he did not have a gun licence.”

Beaches-East York MP Nathaniel Erskine-Smith told Beach Metro Community News that this version of Bill C-21 is an improvement on the earlier one and that came about by listening to both experts and those personally impacted by gun violence.

“We were able to improve the previous legislation by listening to experts and people affected by gun violence, including the Danforth Families for Safe Communities,” said Erskine-Smith. “Many of us in the Liberal caucus were vocal about the need to take more serious action, and it was good to see Minister (Marco) Mendicino and his team engage meaningfully with advocates in our communities.”

Along with the freeze on handguns, Erskine-Smith said the new legislation also makes it harder to get a gun.

“On a going forward basis, an individual citizen will no longer be able to acquire a handgun for personal possession,” he said. “The proposed legislation will also make it easier to remove firearms from someone who poses a danger to themselves or others and to revoke firearms licences in cases of domestic violence or criminal harassment.”

Erskine-Smith he would have also liked to see a ban on the private possession of handguns in Bill C-21, and hopes that may come in the future.

“I had advocated for a ban on the private possession of handguns and to strengthen commercial storage rules.The law already requires that a handgun can only be used in a licensed facility, and there’s a similar value in ensuring storage at a licensed facility,” he said..

That is something Danforth Families for Safe Communities has also called for.

Erskine-Smith said Bill C-21 also looks to take on the root causes of gun crime in communities and to toughen Canada’s borders against the smuggling of illegal weapons.

The federal government has “begun to roll out $250 million to support local organizations and community-led projects that tackle root causes and help youth involved in or at risk of joining gangs,” he said.

“Overall, the legislation and border efforts are significant, while much more meaningful funding is required to reduce poverty and increase both economic opportunities and community supports. We also need to better address the drug trade’s role in motivating gang violence.”

A commemoration ceremony to remember the victims of the Danforth Shooting will take place this Friday, July 22, starting at 6 p.m. at the north end of Withrow Park where trees in memory of Reese Fallon and Julianna Kozis have been planted.