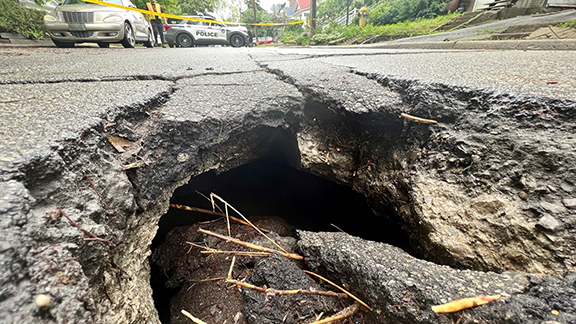 A developing sink hole on Waverley Road south of Queen Street East has forced the closure of the road as of Monday, July 18. Photos by Erin Horrocks-Pope.

Waverley Road south of Queen Street East is blocked off today as city crews investigate a sinkhole that has been noted by residents on the street for roughly a month.

Firefighters reported the sinkhole to emergency crews this morning as they deemed it a risk to public safety.

The hole could most recently be measured at approximately two-by-two feet on surface level with a trench of empty space under the asphalt, posing a hazard to vehicles driving down the road.

A city employee, who has requested to remain anonymous, on site told Beach Metro Community News that multiple reports of the hole had been made to the city in recent weeks, though crews only arrived today because of it being reported by the firefighters. Residents of Waverley Road took it upon themselves to draw attention to the hole for drivers by encircling it with spray paint, and tossing pylons in. A neighbour said that recently a bouquet of flowers was propped up in the hole as well.

According to the city’s website (Toronto.ca) potholes are normally repaired within four days or crews being made aware through 311 service requests from residents and proactive patrols though a call to 311 placed by Beach Metro Community News revealed that due to a high volume of requests, repairs are taking closer to 10 business days.

The most recent report to the city of the Waverley Road sinkhole as confirmed by 311 was June 15.