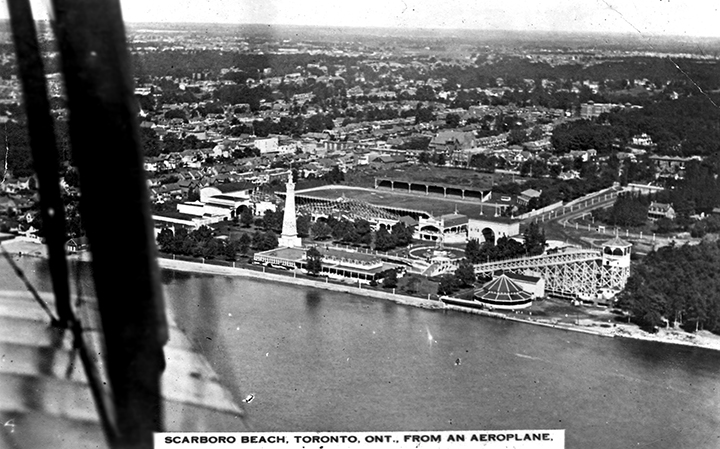 The Scarboro Beach Amusement Park taken from a plane in approximately 1924. The park was sold and closed in 1927.

The project to automate their card index, led by project head and 2021 Beaches Citizen of the Year Barbara Myrvold, as well as fellow librarians Irena Lewycka and Katherine Vice, began in 2019.

With the help of hard-working volunteers, TBETHS was able to automate close to 13 thousand index cards containing the history of the Beach and East Toronto, primarily the area between Coxwell and Victoria Park avenues, Lake Ontario and the southern boundary of the former Borough of East York.

“The goal was to get this information out of being in a single place and out for anyone in the world to enjoy,” said Myrvold.

Myrvold, and TBETHS former treasurer and archivist Mary Campbell, were on hand when the Toronto Public Library (TPL) decided to switch to automated records from card catalogues. Not only did TPL allow Myrvold to take the cabinets, they’ve been supportive of the project to automate them ever since according to Myrvold. The library provided meeting places for TBETHS and was instrumental in the creation of The Beach in Pictures and The Danforth in Pictures written by Cambell and Myrvold.

Campbell is the TBETHS former treasurer. The present treasurer is Julita Tyszewicz.

The database, that goes from the late 1700s and Captain Jean Baptiste Bouchette all the way to 2005, is the final stage of TBETHS’ goal to preserve local history. The Society began in 1974 and was incorporated in 1978. A few years after that, TBETHS was able to secure funding to pay students to transcribe the library’s catalogues to index cards.

Calls for volunteers that went on the TBETHS’ website and Facebook page in 2019, and were amplified by social media posts from Beaches-East York Councillor Brad Bradford.

“All in all, we ultimately had more than 25 volunteers,” said Myrvold. “We would give them a stack of cards and they would dutifully go home and enter them into Google Sheets. It was so great to have and they were so diligent. Some of them entered hundreds of cards. It was really great community support and response and to me was a real highlight.”

Being a project led by librarians, accuracy was of the utmost importance.

“It was wonderful to have three professional information specialists working on this but we also have our standards,” said Myrvold.

The entries in the database will have the date and title along with either a summary or quote that describes the entry. Corresponding pictures and maps will be added as well as links to other sources whenever possible. Parallel projects, such as a bibliography and more detailed maps, will eventually be included in the database as well.

The database isn’t all that TBETHS is working on. To learn more about TBETHS and its events please visit http://tbeths.com/index.asp

TBETHS is accepting members for the new fiscal year with an annual membership fee of $20. Membership includes access to events, a vote in meetings as well as the ability to run for election to the Board of Directors. They have added E-transfers as a method of payment in addition to cheque and cash. For more info on TBETHS membership, please go to http://tbeths.com/membership.asp