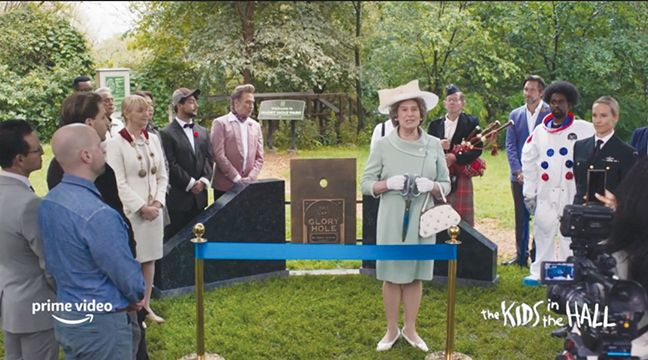 The Kids in the Hall were filming at the eastern entrance to Glen Stewart Ravine off Beech Avenue last year for their new Prime Video series.

“Whose woods these are I think I know…”

Do you recognize these woods in the photo? Bonus points if you can guess the occasion. Is it a royal celebration? A ribbon-cutting ceremony for a new park? No, it’s just the Kids in the Hall up to their old tricks in a new sketch comedy series streaming on Prime Video.

All the Kids are back in town to warp young minds all over again: Dave Foley, Bruce McCulloch, Kevin McDonald, Mark McKinney and Scott Thompson.

Toronto is blessed with many woods that are “lovely, dark and deep” like our Glen Stewart Ravine. The Kids were filming last summer at the eastern entrance to the ravine on Beech Avenue, just south of Kingston Road. (Rachel McAdams filmed a scene nearby for Mean Girls.)

My wife and I were walking by that day and saw workers putting up a platform. I didn’t clue in that it was for filming until my better half pointed out the edgy new name on a sign.

“Glen Stewart” was the estate of Reverend William Stewart Darling (1818-1886). Unsuitable for housing, the ravine area was given to the city in 1931. Our beautiful oasis has been much appreciated by Beachers, including naturalist Fred Bodsworth and painters William Kurelek and Doris McCarthy.

“What’s in a name? That which we call a rose by any other name would smell as sweet.”

In their book The Beach, Glenn and Jean Cochrane called the ravine “the Naitch” short for the Nature Trail.

When we were kids we played there all year round. Some called it “the bush”. We just called it “the ravine”, but wouldn’t venture to the eastern end of the woods for fear of the mythical “Bush Gang”. It was a place of adventure where imaginations could run wild. We didn’t need video games.

“We were all very much trying to prove to our dads that we were men…by dressing up as women.”

Accompanying the new series is a documentary The Kids in the Hall: Comedy Punks which gives a 40-year retrospective of the irreverent comics who first came together in the 1980s at the Rivoli in Toronto.

Thompson was one of the first openly gay comedians at a time when society was less progressive. Happy Pride Month!