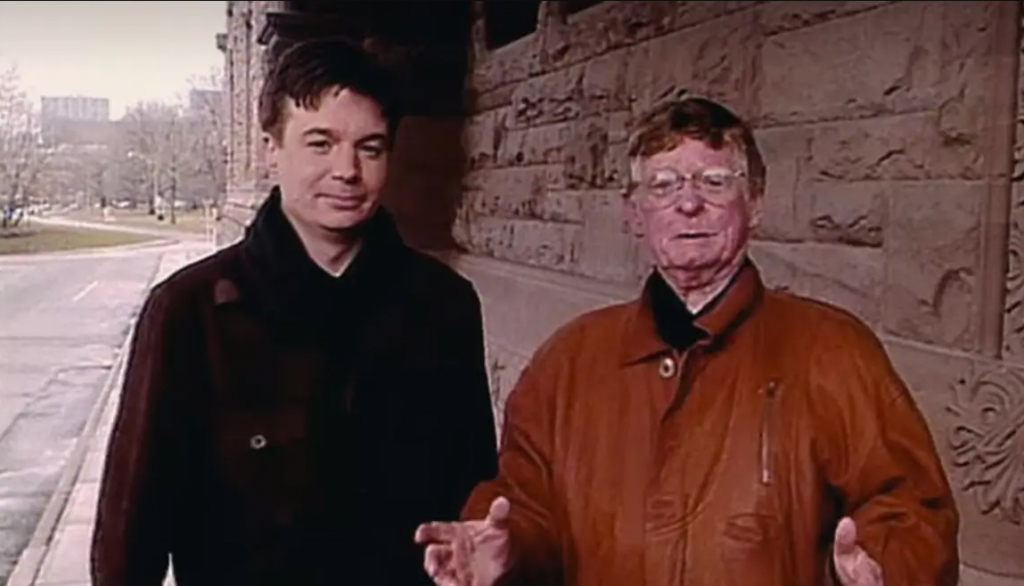 Mike Myers, left, and the late, great Glenn Cochrane conduct a CFTO News interview back in the late 1980s or early 1990s. Myers has created a character called Ken Scarborough in honour of Cochrane for the Netflix series The Pentaverate.

Myers plays eight wacky characters, including the hero of the tale, a mild-mannered television reporter from Toronto. Ken Scarborough needs to bring in a big news story to save his job which leads him to track down an ancient and powerful secret society.

The Pentaverate is a spoof that mixes high concepts about conspiracy theories and misinformation in the digital age with very low-brow humour about bodily functions. (Canadians don’t really say “a-boot,” do we?)

Ken is on the cover of “Canadian Nice Magazine.” Be warned: there are a lot of four-letter words like “kind” and “nice” plus many a “sorry,” “eh” and “sorry, eh.” The humour is juvenile, but sorry, it’s not for the kids unless you want to do some explaining about very rude jokes and “how come they get to swear so much?”

Myers told a crowd at the “Netflix is a Joke” Comedy Festival that, “I really wanted to dedicate this show to local journalists, because right now in this global war between fascism and democracy, you know, the first casualty of war is truth. Getting rid of local news is just the beginning of a slippery slope of all unfalsifiable fact.”

After the end credits we see archival news footage of a young Mike Myers beside Glenn Cochrane who says, “During his distinguished acting career there was one role that Mike Myers always wanted to play, but fate never gave him that opportunity. But today thanks to the magic of television his moment is at hand.”

Cochrane was a CFTO local news reporter for 25 years, a Beach Metro Community News columnist, community leader, Beach Citizen of the Year in 2002 as well as an author along with his wife Jean.

Glenn was active at Community Centre 55 and in helping to save the Leuty Lifesaving Station.

In 2009 Glenn and Jean co-wrote The Beach: An Illustrated History from the Lake to Kingston Road.

The Cochrane family lived in Balmy Beach for more than 40 years. Glenn wrote his last column for this paper in January 2012.

It’s been 10 years since Glenn Cochrane passed away in June 2012. He is fondly remembered as a true ambassador for the Beach and Toronto.

It is good to see his sense of humour and kindness portrayed in this new series.

What a lovely article. I’m Glenn’s daughter, Judy. Loved the series and Mike really has him nailed to the point I actually thought I heard his voice. Dad loved writing and his column was a source of pride and joy. Thank you