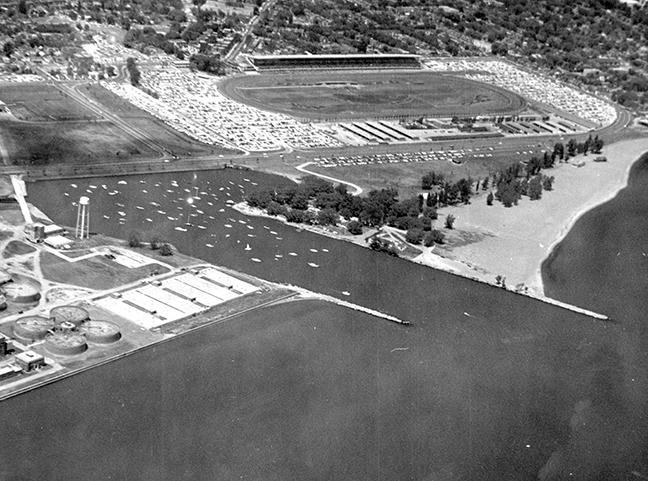 Photo above, shows an aerial view of the Ashbridge's Bay Yacht Club taken in 1962. Inset photos show members working on the clubhouse in 1935; a sail on the lake in 1948; the opening of the season in 1977 with former Toronto Mayor David Crombie; and the launching of a boat in 1979. Photos: Submitted.

For a community named after its waterfront location, the Beach has understandably embraced Ashbridge’s Bay Yacht Club (ABYC) as a hub for those interested in getting out on to the water and experiencing the joys of the lake. This year, the club is celebrating its 90th anniversary and looking back at its modest beginnings.

The ABYC was founded in 1932, during the peak of the Great Depression, by Archie Walker, Bob Walker, Rollie Alsop, and Johnny Gibson.
With the faltering economy and an uncertain future ahead of them, they found respite by getting out on the open water for sail boat racing with friends.

The club was originally located at Knox and Eastern Avenues and served as a way into Toronto-wide inter-club competitions, which inevitably led to more people wanting to join. But with little money going around to spend on leisure, aspiring members would opt to contribute in other ways in exchange for a spot in the club. So, in 1936, the first clubhouse was built by the club members themselves, which set off a lasting tradition of member contribution in lieu of high membership fees.

Today, this model carries on, allowing more people to join the club and get involved in sailing.

Carolyn Weckesser, a commodore at the club and the chair of the 90th anniversary celebration committee, explained how this has led to a very diverse group of members today, from around the city and of all different age groups.

“Its a sport that you can take up at any age and do as long as you feel healthy enough to do it,” she said, adding that they have sailors from as young as five all the way up to 95.

They’ve seen a significant increase in membership over the last five years, likely due to the COVID-19 pandemic which left many looking for an outdoor hobby.

“No better social distancing than out on the water,” said Weckesser.

One of the more notable club members is Sarah Douglas, who has won multiple awards in sailing competitions around the world and set the best result (sixth) for a Canadian woman in an individual sailing event at the 2020 (2021) Tokyo Olympics. Douglas also plans compete again at the 2024 Olympics in Paris.

But members don’t need to be Olympic athletes to join the fun. ABYC’s vision is to open up the shore to the community and enable anyone to participate in watersports. Even without a boat, members can get on the water through the co-operative sailing program, which lets you sail on one of the club-owned boats.

For those that might be new to the water and don’t want to sail right away, there are also kayak and paddleboard programs that give members a chance to wet their feet, so to speak.

In keeping with its vision of inclusion, ABYC has also partnered with Broad Reach Canada this year, an organization dedicated to equality and inclusion through sailing.

Yachting and sailing has traditionally been seen as an exclusive activity, often associated with those who are wealthy. Through their partnership with Broad Reach and low membership fees, ABYC continues its efforts towards making these activities accessible for all who are interested, regardless of their socio-economic status. Over the years the club has hosted a number of regional, local and national sailing regattas, and will be hosting many more this year as they celebrate their 90th anniversary.

The celebrations will culminate with the Anniversary Heritage Weekend Sept. 17 and 18.

For more information on the club, please go to https://abyc.ca/