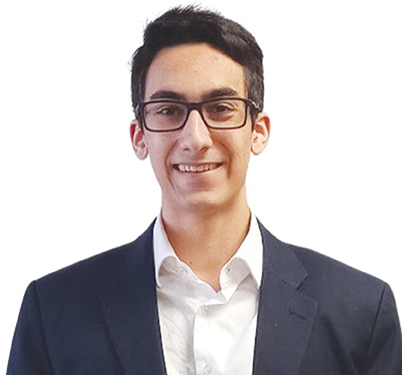 Peter Naus is the New Blue Party candidate for Scarborough Southwest in the June 2 provincial election.

I have completed one semester of a Bachelor of Science degree, Environmental Physics Specialist program, at the University of Toronto Scarborough but could not continue because of the COVID-19 vaccine policies.

I completed a Basic Certificate in Christian Humanities in May 2020 at Our Lady Seat of Wisdom College in Barry’s Bay, Ontario. I worked at Campaign Life Coalition as a summer intern for two summers. I gained knowledge and skills in his role at the Ontario Public Service Tribunal’s Ontario Landlord and Tenant Board as a summer office assistant.

I ran for a seat on National Council in a by-election for the Conservative Party of Canada. I have participated in several federal and provincial party conventions as a delegate. I have volunteer experience serving on a federal Conservative riding board and canvassing on different candidate’s campaigns.

I am running in this election trying to bring hope and freedom back to the constituents of Scarborough Southwest on June 2. This is the most important provincial issue in this election because Ontarians can not afford the economic, psychological and legal cost of four more years of lockdowns.

The area I would like to focus on if elected MPP for Scarborough Southwest is education.

I have heard from constituents that are furious with government overreach in education, especially concerning the mandatory masks for children 12 and younger, as young as five years old, being forced to wear a mask, for several hours a day, every day, in public education settings.

I have also heard from many of my fellow UTSC students that were frustrated by the elimination of the opt out for incidental fees.

I find it absurd that the Ontario PCs kept many of the age-inappropriate elements in Ontario’s comprehensive sex ed curriculum written by former Liberal Ontario deputy education minister, Benjamin Levin.

Constituents can learn more about the New Blue Party platform, the New Blueprint, at www.newblueontario.com

QUESTION 3 – What do you consider to be the top local issue in Scarborough Southwest and the top provincial issue in this election?

New Blue MPPs elected on June 2 will fight to end all COVID-19 mandates, including a complete repeal of Ford’s emergency measures; a ban on COVID-19 vaccine passports; and restitution for those harmed by emergency measures applied by the governments of Trudeau or Ford.

New Blue is committed to growing Ontario’s economy at five per cent of GDP annually, starting with taking down the costly Wynne-Ford wind turbines to reduce electricity prices and improving productivity. New Blue will provide tax relief by cutting the HST from 13 per cent to 10 per cent and axing the Ford carbon tax.

New Blue will fight to renew political accountability by scrapping the $100-million taxpayer subsidy of political parties, banning lobbyists from party politics, and cracking down on voter fraud in internal party elections.

New Blue will defund establishment media and promote a free press by cancelling the Toronto Star’s $500 million online gambling license and taxing all corporate media that receive any of the $600 million federal government taxpayer “bailout” subsidy from the Trudeau Liberals.

The Ford PCs and their left-wing ideologues and lobbyists are determined to leave Ontario “woke” and “broke” because the PC party isn’t blue and just isn’t for you.