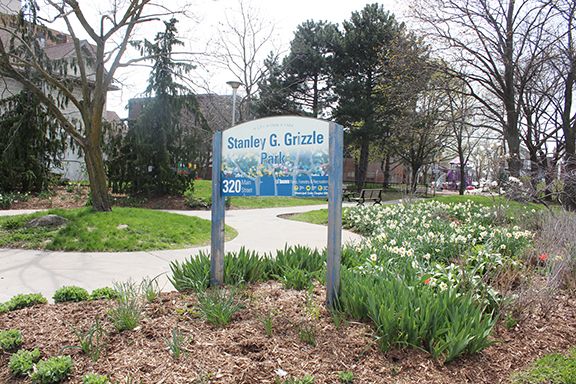 A Jane's Walk called Toronto Has a Main Street? will start at Stanley G. Grizzle Park (on Main Street just north of Danforth Avenue) on the evening of Friday, May 6. A number of Jane's Walks are planned for East Toronto this weekend.

A number of Jane’s Walks are planned for this weekend in the East Toronto area.

Jane’s Walks are held in honour of urbanist, activist and longtime Toronto resident Jane Jacobs, and celebrate the communities that make up the city.

• Gimme a Place to Sit and People Watch on May 6 from noon to 1:30 p.m. It starts at the Brick Obelisk on the northwest corner of Dundas Street East and Carlaw Avenue, and is led by James Burton.

• Toronto Has a Main Street? on May 6 from 6 p.m. to 7:30 p.m. It starts at Stanley Grizzle Park, on Main Street across the street from the Main Subway Station, and will be led by Sarah Dewar.

• $17 a flush: the Prince Edward Lavatory, Riverdale Park, to the Don Jail and back on May 7 from 10 a.m. to noon. It starts outside Broadview Subway Station and will be led by Richard Longley.

• Public Art in Beaches East York on May 7 from 2 p.m. to 5:30 p.m. It starts outside Coxwell Subway Station and will be led by Adam Smith. This walk will be broken into three parts with a focus on public art on The Danforth, on Kingston Road and on Queen Street East. Participants will take transit between some of the areas and there will be breaks in between.

• Transit Dream or Nightmare: Tour the proposed Ontario Line in South Riverdale on May 7 from 2 p.m. to 4 p.m. It starts at 410 Pape Ave. and will be led by Paul Young.

• World Labyrinth Day – Blue Zone Scarborough on May 7 from 7:15 p.m. to 8 p.m. It starts at the traffic island on Teesdale Place, just west of Pharmacy Avenue, and will be led by HiMY SYeD.

• The Path to Park Privatization on May 8 from 2 to 3 p.m. It starts at the Balmy Beach Club, at the foot of Beech Avenue, and will be led by Adam Smith.

For more info on Jane’s Walk and a list of scheduled walks and further details on them, please go to www.janeswalkfestivalto.com