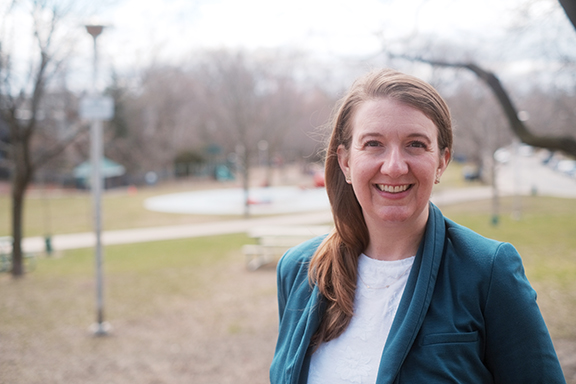 Kate Dupuis will be the NDP candidate for the riding of Beaches-East York in the upcoming provincial election. Photo: Submitted.

The NDP has named its candidate for the Beaches-East York riding in the upcoming provincial election on June 2.

Dr. Kate Dupuis will be running for the seat now held by MPP Rima Berns-McGown of the NDP. Berns-McGown announced earlier this year that she would not be seeking re-election.

This will be Dupuis’ first time running as a political candidate, and she is excited to carry on the work done by Berns-McGown over the last term.

“I have always admired Rima over the past four years,” said Dupuis. “She has been such a hard worker in the community and such a fantastic representative.”

Dupuis said when she heard Berns-McGown would not be seeking a second term, she decided to run for the NDP in Beaches-East York.

She said her experiences over the past two years of the COVID-19 pandemic were motivators for her to seek office provincially.

“I was quite vocal during the pandemic about safe schools and daycare,” said Dupuis. “I saw the impact a small group of people can make…We were all so frustrated by the repeating waves of COVID closures and openings.”

Dupuis lives with her husband and two children, ages three and seven, near Danforth Avenue just east of Coxwell Avenue. They have lived in the area for the past 13 years.

She is a neuropsychologist. “Basically I’m a brain doctor. That’s how I explain it to my kids,” said Dupuis.

She is also a post-secondary educator at Sheridan College in Oakville and researcher.

One of her areas of research is how art can help people’s health as they get older.
“I specialized with adults and older adults, seniors aging at home, at seniors homes and long-term care homes,” said Dupuis.

This gave her first-hand knowledge of the impact of COVID-19 on seniors and how it was connected to the provincial healthcare policies under the leadership of Ontario’s current Progressive Conservative government.

“I saw the devastation within long-term care facilities. The ‘iron ring’ never materialized and we lost 4,000 people,” said Dupuis. “It was a very tough time for seniors and the people who work with them and it still is.”

Dupuis said key issues for her this election will include advocating for schools, long-term care, overcoming healthcare inequities and supporting small businesses that are still trying to recover from the pandemic.

Ontario has seen a “failure in healthcare” over the past four years, she said.

“Our nurses and PSWs (personal support workers) don’t get paid enough. And it is mostly women who work in those sectors,” said Dupuis.

“I think our government needs to listen to experts and use data to make decisions instead of using dates on the calendar to make their decisions.”

She said her work in healthcare, research and also with helping her own children navigate the uncertainty of the education system over the past two years gives her a solid understanding of what people are dealing with in the riding and what is important to them.

“We were closing schools then opening schools…it was so hard on parents and kids,” said Dupuis.

“I think I have a relatively unique skill set with my background in education and healthcare. I’m a mother of two kids and a really hard worker. I am a compassionate and passionate person. I’m committed to helping families and young people looking for housing and our small businesses. And to help us to recover together from the pandemic.”

Dupuis said she’s excited to get out on the campaign trail and start meeting with local voters from across the riding.

“The candidate has to be a really good listener, and understand a really diverse group of individuals and find areas where we can all come together,” she said of Beaches-East York.

The provincial election takes place on June 2. Also running for the seat are Liberal Mary-Margaret McMahon, the Green Party’s Abhijeet Manay, and Angela Kennedy for the Progressive Conservatives.