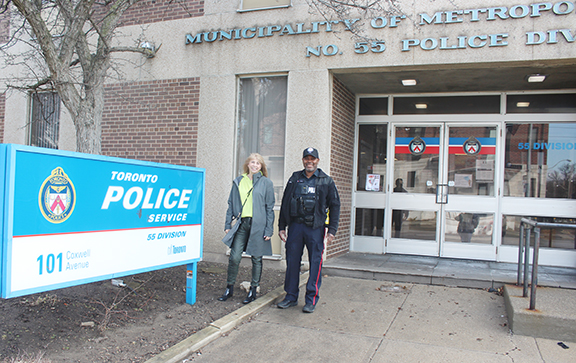 Cindy Cass, of the Pleasantville Neighbourhood Watch, and Const. Jonathan Little, Crime Prevention Officer with 55 Division, in front of the police station on Coxwell Avenue. Photo by Alan Shackleton.

Residents in East Toronto can help to increase community safety by forming a Neighbourhood Watch program.

That has been the experience for those living in the Beach community known as ‘Pleasantville’, said resident and local Neighbourhood Watch co-ordinator Cindy Cass.

She said the Neighbourhood Watch has drastically reduced criminal behaviour in the area which is bounded by Woodbine Park to the west, Woodbine Avenue to the east, Queen Street East to the north, and Lake Shore Boulevard East to the south.

“It really prevented a lot that was going on,” said Cass.

The Pleasantville Neighbourhood Watch has connected residents to become a unified group, working together to deal with problematic behaviour in the area that has included large, out-of-control gatherings in Woodbine Park and some violent, dangerous and destructive late-night behaviour by huge crowds partying in the Woodbine Beach area last summer

The Neighbourhood Watch was able to organize online community meetings with the local councillor and 55 Division police representatives which helped deal with those situations and other concerns related mostly to the large crowds, late-night parties in the park and illegal parking.

Building on that success, Cass who is now a member of the 55 Division Community Police Liaison Committee (CPLC), wants to help other residents within the division form their own Neighbourhood Watch programs.

A Neighbourhood Watch program allows community residents to work together with police to identify problems, spread awareness regarding crimes and develop specific solutions.

The Neighbourhood Watch moderator becomes the contact person with police and city departments such as bylaw and parking enforcement. The moderator reports the problems, offers community input and also possible solutions.

• Identifying the location of the area to be covered by the Neighbourhood Watch.
• Setting up a structure, including a moderator as well as street captains.
• Setting up a private social media page, such as on Facebook, and allowing people in the neighbourhood to join.
• Street captains talk to the community about and take note of problems that need to be resolved. These issues are relayed by the street captains to the moderator.
• The moderator informs a responsible entity, such as a police officer, city councillor, or a department of the city government, of the problems.
• The moderator takes the advice and then reports back to the rest of the Neighbourhood Watch members.

People tend to think that having a Neighbourhood Watch is time consuming. But that is not the case. It takes time to get it started. But once it’s going, the time commitment is low, said Cass.

“We have had full support of Beaches-East York Councilor Brad Bradford and a lot of help from (55 Division police officers) Norman Leung and Jonathan Little. Without them and the volunteers, we would not be successful,” said Cass.

Little, a Crime Prevention Officer who works with the Pleasantville Neighbourhood Watch, said massive parties in and near the area during the warm weather months is an ongoing concern identified by residents.

He said police plan to use social media to keep residents aware of any upcoming issues in the area.

Parking Enforcement Officers and the City of Toronto will also be working to manage large crowds of people, increased traffic and illegal parking this spring and summer.

“Officer presence for these events is always important to try to deal with problems before they get out of control,” said Little.

Along with keeping residents safe, Cass said a stronger sense of community can emerge from a Neighbourhood Watch. This happens in particular when there are informal programs set up such as book clubs, dinner gatherings and events on holidays. A result of these programs is that neighbours get to know each other better, she said, and also start identifying other issues that need local attention such as community clean-ups of trash in parks and supporting charities.

For information on how to form a Neighbourhood Watch in your community, please contact 55 Division at 416-808-5500 and ask to speak to a Crime Prevention Officer, or go to www.torontopolice.on.ca/publications/files/safety/neighbourhoodwatch.pdf

Those looking to form a local Neighbourhood Watch can also contact Cass at Pleasantvillethebeaches@gmail.com for advice and help.

As a Beaches-East York resident, I am horrified to see this being celebrated. Have we learned nothing at all from recent years about racial profiling and the harm the police have in our communities for BIPOC? Utterly shameful. https://tigernewspaper.com/the-neighborhood-watch-incites-racial-profiling/

A neighbourhood watch like the one that caught suspicious prowler, Ahmaud Arbery?

I encourage anyone who thinks this is a good idea to look at their local ‘Nextdoor’ groups to see just how bigoted petty and ridiculous the neighborhood busybodies who would make up a neighborhood watch are.

Terrible idea that would encourage the worst attitudes, almost certainly lead to more racial profiling and harassment and make our communities less safe.

The beach is a public space for all. It doesn’t need heightened surveillance of mostly families enjoying the space? Especially BIPOC or newcomers who will be targeted. A bad look.