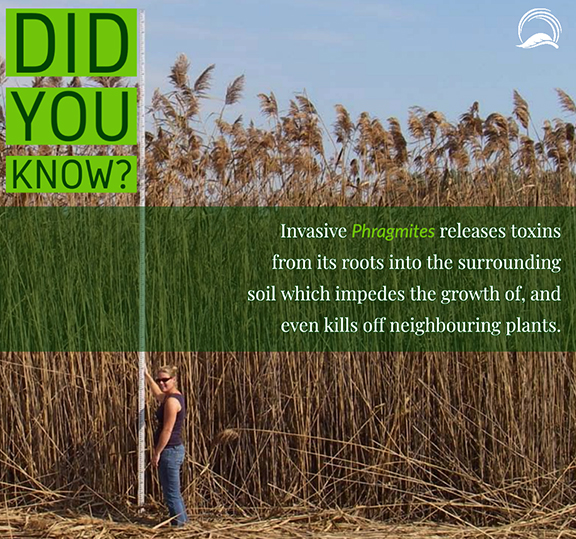 This photo by Janice Gilbert from the Ontario Ministry of Natural Resources shows how high invasive phragmites can grow.

Invasive phragmites are not only affecting the ecological environment of the East Toronto area but also the municipal infrastructure.

According to the Ontario Phragmites Working Group (OPWG), invasive phragmites are a highly invasive plant that is common in wetlands, riversides, and roadsides. It is more concentrated in areas with standing water, and its roots are extremely long and dense. It competes with native wetland plants, robbing their nutrients, leading to a decline in plant biodiversity, as well as a loss of wildlife habitat.

Janice Gilbert, the Founder and Executive Director of the Invasive Phragmites Control Centre, said there have been many changes in the landscape over the past few decades that have resulted in increasing numbers of the plants. Those areas used to have forests and fields, however, the neglect of the growth of these invasive phragmites, is causing gradual changes in the landscape, including changes in natural rivers and streams, and especially the climate.

“The recreational impact of the piles of invasive phragmites on some areas is huge,” said Gilbert of a number of lakes in the province. “Nearby residents no longer see the lake, and they can’t access it for activities such as fishing, swimming and boating.”

“People who own shoreline property, when they go to sell their cottages and homes, but they don’t get good value out of it.” added Gilbert.

Some of the lakes were so full of ​​phragmites; people could not even see where the water was and there was no real shoreline access, or lake access.

Davies said that phragmites are common at intersections and cause accidents, where people’s view is blocked by piles of extremely tall plants. They also clog drainage ditches, resulting in farm lands not properly draining and negatively impacting agriculture. In winter, the dead stems of phragmites often cause fires, she said.

Toronto’s Todmorden Mills Wildflower Reserve, in partnership with local municipalities and other organizations, has been actively working on the control of this invasive species.

The City of Toronto advocates that the management of invasive species should focus on artificial methods.

The Todmorden group made different tools and experimented with different methods, such as cutting in the ground with shovel, herbicide spot treatment, cutting off the seeds head and so on.

“The plant will grow through asphalt, so certainly there is a cost impact.” Gilbert said.

For more on how the City of Toronto advises residents to deal with invasive species, please go to https://www.toronto.ca/services-payments/water-environment/trees/forest-management/urban-forest-management/